It's time to post now. I'm SICK OF THIS DRAMA!

He was using an unlikely scam that goes like this:

ihatepotatoes: MY LIST FOR A BLACK SCARF! (His list had a bunch of his rares on it.)
Worstanimallover: BLACK SCARF ON MY LIST!
Random Jammer: Ooh! I'll trade you my tan carpet for your black scarf so I can get Potato's rares!

Turns out Potatoes and Worst are both the same person. This is a complicated but unknown scam, so a lot of people fall for it.

Frantically, my buddies scurried to my den and explained what they had seen. I was bewildered. The one friend I had gained so much trust in betrayed us all. Ha, how ironic! A scammer leads the AJSG, a scam-fighting gang. :I

Later that day, we caught him scamming again in Coral Canyons.

I talked with Nethter before deleting him. He claimed it wasn't "scamming", as of a rule by the so-called AJSG. Uh, SOMEONE NEEDS TO VISIT THE DOCTOR! Taking another person's items is WRONG. In case you didn't know, MOST OF US CALL THAT SCAMMING! -.-

This morning I STILL had Nethter on my list, but I thought it was best to remove him. So I did, but I realized I made a bad mistake. I could have spied on him, to see if he was gonna scam again.

I sent him another buddy request, and he accepted. He was at his den, chatting with breazia, darkfang900, and KatnisstheWolf (I think) about getting revenge on kittens1111.

Nethter "missed" Kittens a lot, so he was angry at her for deleting him. I told him getting revenge on Kittens was wrong, but breazia tried to cover up their scheme.

I caught it on camera. :) Sorry if it's hard to see, but I promise you, he did actually say that.

After that, I logged off for a while, but when I logged back on this afternoon, I discovered Kittens had added him back.

I asked her, "Why did you add back that horrible scammer?"

She responded, "He swore not to ever scam again."

My apologies, but people lie in this world, especially evil scammers like Nethter. Pink, Mythy and I KNEW he was behind something.

I told Kittens to be careful, but every time I tried to talk to her she was being pulled like a magnet to him. :( I was depressed.

Now, Nethter is spreading lies about me. DON'T BELIEVE THEM. He is untrustworthy. 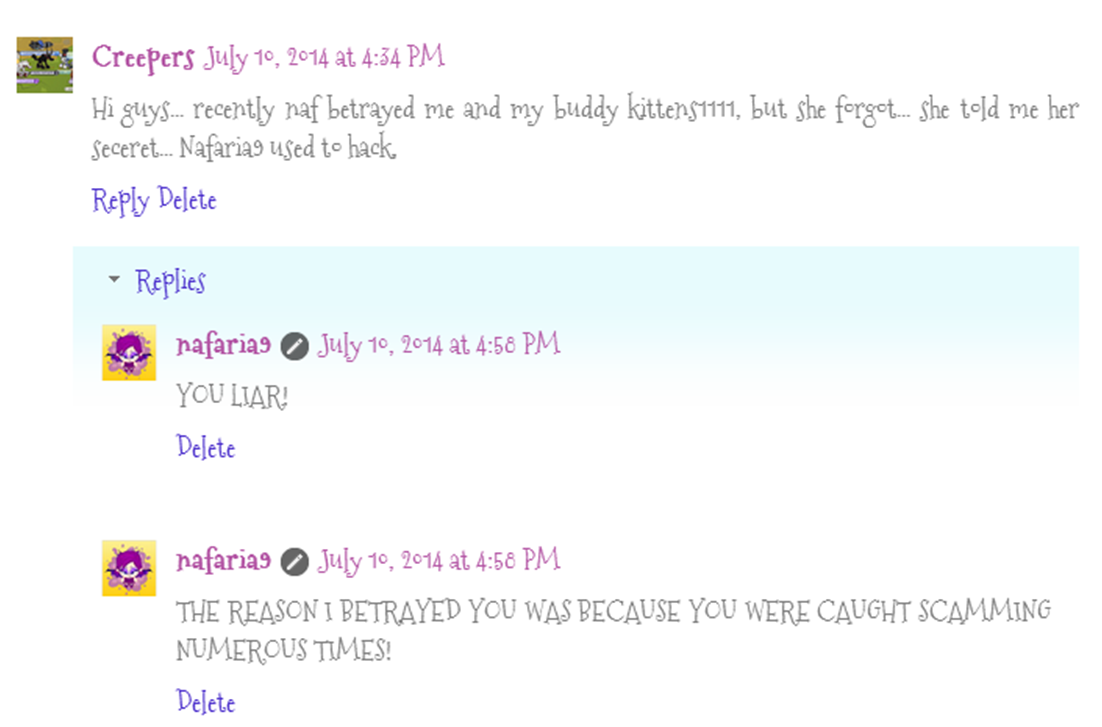 Also, here are a few other reasons I deleted you, Nethter:
You did this to me, but whatever you say will be used against you. Have a nice day. :T Oh, one more insult: AJSG should be totally renamed Animal Jam Scam Group.

Well, if you knew him good enough, you would know rumors are spreading across a few AJ blogs.

These blogs include RATH, FATE, and AJW. I bet there could be more.

Here is one for example:

This unkindly Anonymous states that Repti is a suspect for hacking, scamming, bullying, and generating. :I

Before I move onto my rants, I want to tell the entire story first.

Repti was a player in the Beta Days. In fact, he was a Guide. Now, AJHQ DID hire some kids to be Guides, so Guides weren't only adults.

Since he was a Beta Tester, he used to have a main account where he kept all of his Beta stuff on. He had rares galore- masks, spikes, Founder's....

But when he found his old account just yesterday, out of 2000 max. alts, he gave his most trusted buddies some gifts.

And Nethter was one of them.

So Repti sent him a Founder's Hat.

Later on (I think it was this morning or last night), Repti and Nethter (now tacocat101 after his so-called "hack")  were chatting in his den. A couple of my buddies and I stormed into the conversation, and Nethter noticed Repti's mask. He said it was unreleased, according to the Animal Jam Wiki, because there wasn't a picture of it on the website. :I

How DUMB CAN YOU GET!?

The mask was released, and even if it wasn't Wikipedia is one of the worse resources you can find. Anybody can edit it. Nobody is perfect.

The Internet isn't always correct. Besides, you also said to us that you thought Repti may have hacked the masks and Founder's. That's a lie that you have no proof of.

*The reason I put quotation marks on the "hack" was because I don't believe you were actually hacked. How come you get hacked several days ago on your Elf Tail, and it shows up on your animal the next day? You also get tons of donations from ugly little AJSG followers. That's why I didn't send you back the gift you gave me. It was rightfully mine the minute I got it. I didn't trust you. With the items you have, you can get back ANYTHING."

Today I went swimming with my friend, and while I was gone, Nethter told my buddy laurensmartpants that Repti scammed the Founder's he got.

Nethter is spreading the rumors. It's too clear to see.

Now, before you go and say, "NAF SAID LAUREN SCAMMED HERSELF", it was a theory. I was a little suspicious about how she got her headdress back after being scammed on it, but Repti said he sent the Founder. So everything was okay.

Anyway, being Nethter's buddy, I wanted to have one last blow on him. To see if he chose friends over rares.

Repti told me he was guilty for sending him that Founder's Hat when we realized he was the one behind all this chaos.

So, as a joke, I played a prank on Nethter, saying Repti misses his old Founder and wants it back.

I was not surprised when he said this in reply:

And then he stooped as low as to make an unforgettable insult (and most likely a lie). 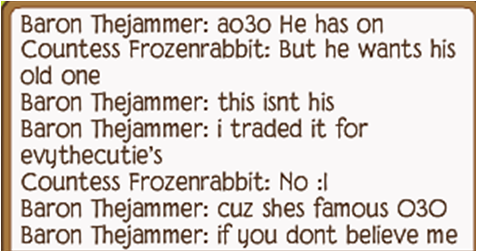 Baron, or Nethter, said he traded the Founder to evythecutie, and wouldn't give it back because it was apparently worth more to him.

That must have hurt Repti bad.

Nethter basically was PROUD because he had EVY'S FOUNDER. That proves he appreciates Evy's Founder more than Repti's.

Evy isn't even his friend! People who don't care about pixels would say you're an idiot. :3

To end the update, I want to say a few more things:
We all cared for you like a REAL FRIEND! I am so angry that someone I trusted turned on us like this....

Everything keeps on updating and updating...

Anyway, Taco and I forgave one another and moved on for a few weeks. But now he's gone MUCH too far.

So, in that video, you blamed dezarie for scamming, then you tried to scam LPSlovegames3 by saying, "Send me your Founder, I'll send it back"!?

That was your storage, Taco, wasn't it? Get this: worstanimallover is also Taco's side account. Remember? He used it to scam. My guess is that Taco created that video himself, to get noticed by people so he'd become famous. He didn't actually INFILTRATE any scammer meeting- only his OWN meeting.

I don't appreciate how you would stoop so low as to lie, bully, and impostor JUST for the rares. It's not going to get you any farther in life. >8U

And who CARES if I broke your silly truce? The truce wasn't very fair in the first place.

Why...
Why...
WHY...
Posted by nafaria9 at 5:25 PM
Email ThisBlogThis!Share to TwitterShare to FacebookShare to Pinterest