Marhabaan, Jammers! That's Arabic for ''hello''. In case you haven't read the title, today we are going to be talking about the Golden Egyptian Scarab, hence the unique Egyptian intro for this post.

Over the course of the past week or two, items belonging to the popular Egyptian Treasure set (which is a collection of ancient Egyptian-themed den items) have been returning one by one. One of these items is a Golden Egyptian Scarab. It looks like this: 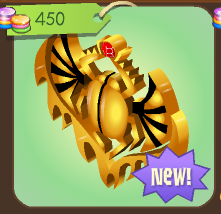 If you've ever seen Aladdin before, you might recognize this piece of den decor to be a bit familiar.

In the movie, this enchanted artifact comes in two separate pieces. When the halves are put together, the scarab comes to life and flies to the location of the Cave of Wonders.

In ancient Egypt, the scarab beetle was a bug that was often used in art and religion. It was very sacred to the people, and symbolized the restoration or renewal of life. A god with scarab beetle-like head named Khepera was believed to push the sun along the sky, renewing each day in the same manner as a scarab beetle would push along a ball of dung.

People also wore scarabs as jewelry (not the actual bug, of course, just an ornament designed to look like the bug) for good luck. Sometimes these charms were given as gifts to families with a newborn child, or placed on top of the deceased.

Now that you know more about the inquisitive meaning and backstory of the scarab beetle, hopefully you'll be inspired to purchase a Golden Egyptian Scarab for your den!

Thanks for reading. Wadaeaan! (Goodbye!)