Hey Jammers! I hope you're all having a lovely day so far!

I don't know if I'm late to the party by just realizing this, or maybe I'm the only one that I know of that realized this, but...

Team Mira and Team Zios have been here for several weeks now, long before they were announced for VidCon. We just hadn't noticed it!

Ever since the background was changed for the Animal Jam homepage, most people seemed to focus on the fact that a coyote (which was, at the time, still in development) was on it.

But just barely the other day, I discovered something with even a greater meaning. 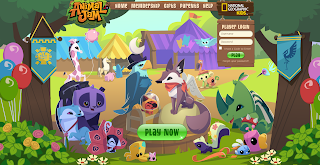 Do you guys see the Mira and Zios banners hanging up on the trees?

I'm about 99.9% sure they were put up there to symbolize the Team Mira vs. Team Zios VidCon challenges taking place right now! Cool, right? :D

Had you ever noticed the banners before now? Let me know your thoughts in the comments.

Oh, and one more thing - apparently the ancient spiked wristbands available in the recent spike sale got a design change. 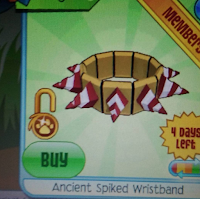 Later, every ancient spiked wristband that was purchased got remodeled to look like this... 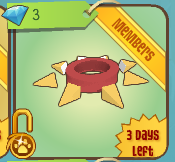 From what I know, there is absolutely none of the original ancient spiked wristband left in the game, because they were all changed. Interesting.

That's all for today! Jam on!