Yesterday, two promo codes for the new AJ comic books were leaked. I know for a fact that an Animal Jam YouTuber named Shopking was redeeming one of these codes for a video when he forgot to blur it out so that no one could see it. After doing some editing, he reuploaded the video with the blurred out code, but it was too late, for the word had already rapidly spread throughout the community, and quite frankly, it's still spreading around!

The good thing about these codes is that it works the exact same for every Jammer, so they're not unique secret codes like other items of AJ merchandise.

The first code is HEARTSTONE, and it gives you a Call of the Alphas book for your den.

The second code is RIDDLETHIS, and it gives you a The Phantoms' Secret book for your den. 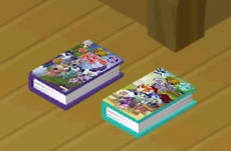 When you click on one of the books, a pop-up message will appear, asking you if you'd like to teleport to the new Call of the Alphas party. It does the same for both books.

If I were to give my personal opinion on these books, it wouldn't be very positive. I was hoping the code would unlock some kind of secret Adventure for us to play, but nope. The books just serve as an instant portal to the party. You can still access the Call of the Alphas party through the party list, anyways. So what's the point of even getting the comic books now that the codes have been leaked, except for if you want to read them? Oh well.  ¯\_(ツ)_/¯

Oh, and one more thing before I go - there's also a new promo item called the sweet table.

Thanks for reading. Have fun with your new codes!