Hi Jammers! I hope you all are having a lovely day so far.

Recently, a mysterious image swept the Animal Jam social media community, and according to most people, it's a leaked picture of an animal that might be coming to Jamaa soon. 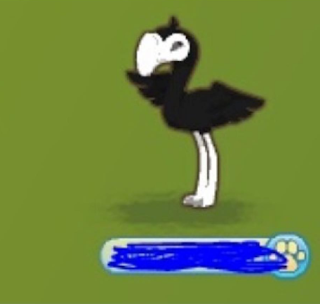 Correct me if I'm wrong, but to my understanding, this picture belongs to someone named Viofy.

From my perspective, the animal could either be a flamingo or an ostrich. If it were a flamingo, it would make sense because the beak is big and curved, whereas an ostrich beak is small and flat. If it were an ostrich, however, it would also make sense because ostriches were an option in a new animal survey long time ago, and every animal that was in the poll got released (falcons and sloths) except for the ostriches. We're still waiting on those ostriches, AJHQ!

Nevertheless, this very well could be an extremely good edit. Someone could have easily taken the beak and head shape from a toucan, and with a few modifications, got this final result.

So, what do you guys think? Is the picture for real or not? And what kind of animal do you think is in the picture?