Anyway, today we are going to be spotlighting Jamaa's most famous scammer catcher in history: firetigerx. 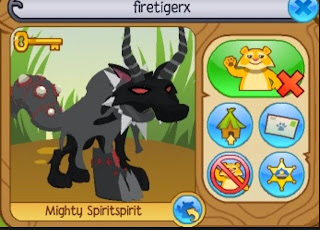 Firetigerx was basically the head police chief of Animal Jam. Much like the agents of the Animal Jam Scam Watchers Society, she "caught" scammers by recording them and then uploading the footage to her YouTube Channel. Back in 2012 when Firetiger was most active, the AJ YouTubing community was extremely small. Firetiger was very popular, but she only had about 2,000 subscribers, which was a lot back then. She also ran a blog, which you can view by clicking on the picture to the right.

Firetiger mysteriously disappeared from Animal Jam in early 2013, and then randomly returned for a visit sometime during spring 2015. She then officially quit for good on October 25th, 2015, due to age (she's 18 years old), busyness (yes, that's a word!), and school.

Oh, I forgot to mention something: Firetiger is indeed female. Similar to snowyclaw's experiences, Firetiger was often called a boy because her main look was a wolf with evil eyes. Firetiger and Snowy both taught us that you don't have to look like a certain gender to be a certain gender.

So, there you have it! Firetiger will always hold a special place in the scam-catching world. She definitely left a mark on this game. ^.^