Hey Jammers! ^.^ I know I've said this way too many times already, but summer is nearly here! :D

This summer is going to be a big jump for the WildWorks team, because, as many of you should know by now, Animal Jam is going to be releasing toys, books, play sets, and so much more!

But did you also know they are going to be releasing coloring books, stickers, markers, pencils, pens, and other bits and pieces of stationary? 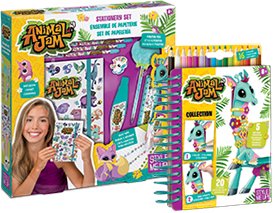 These look super cool! I can't wait for these items to be released. I'm saving up my money for some figurines and plushies. <3

According to Penguin Books, WildWorks' official publishing licensee, two chapters books will also be released sometime between this summer and summer 2017! Cool, right? :)

Thanks for reading! Keep on whippin'!