Hello! Today's new item, which is very, er, human-y, is a pair of Incline Skates. 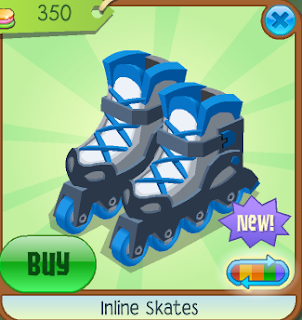 It seems like my luck is growing. Yesterday I got a second Beta Tiara and today I got a Zios Sculpture. Now if only my luck would give me a Mechanical Angel Helmet! :P

I've also gotten a Rare Nessie Mask and a Rare Mummy Mask. Also 2 Rare Beards, but I gave those away.

And, my friend Creeper's friend KatnisstheWolf got an unreleased ICY MIRA STATUE! It looks super epic, and hopefully it will come out in the stores! If not, I still want one. :D

Go to her den to see it!

What do you think of all these Betas returning? They are lowering in rarity, but that means people who were hacked and scammed have a chance to get their stuff back. And, the hackers and scammers are becoming less powerful.

Well, today is the party, along with the contest! I'll get those prizes for the contest set up and done!

If you haven't seen the invitation yet, it's included in one of the posts below.

Anyway, today I wanted to talk about the secret behind the Nessie masks.

The Loch Noss Monster, or in other words, Nessie, is a mythical creature that lurks the bottom of lakes. Like Bigfoot, scientists don't know whether or not Nessie actually exists, so for now he is just a tall tale. Nessie has a long neck with a slick body. He has fins for legs, obviously.

I thought it would be just fun to talk about Nessie, because I honestly didn't know what Nessie was until I looked it up. XD

So, I better get off to work. Stop being so lazy, Nafaria! >:O

Posted by nafaria9 at 8:26 AM
Email ThisBlogThis!Share to TwitterShare to FacebookShare to Pinterest