A great deal of new words was added to the pool of animal names available in today's update, but AJHQ made a tiny typo in one of the names: 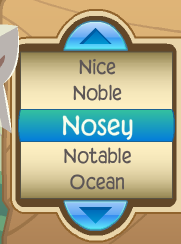 Normally, ''nosey'' is written like ''nosy''. AJHQ made the same mistake with the name ''rosey'', which was later removed and changed to ''rosy''. However, the people that had animals named Rosey could still keep their names.

This just might be the same case with Nosey. If you want a cool name for one of your animals, I suggest you make one named Nosey!

Posted by gingy gingy at 4:21 PM
Email ThisBlogThis!Share to TwitterShare to FacebookShare to Pinterest