Hello and welcome! I have some very interesting news to share, so listen up. ^.^

First of all, it's hailing like CRAZY outside. The worst part is, I had to run through it to get home from the bus stop, which is a freakishly long distance from my house. >.< The hail balls felt like ice daggers on my skin, and now I swear I've got a bunch of small cuts on my arm.

Anyway, someone who wishes to remain anonymous discovered an unreleased item: the Pumpkin Chair! *dun-dun-dun-dun*

No, it's not the RIM that was released back in early October 2014. It's slightly different. 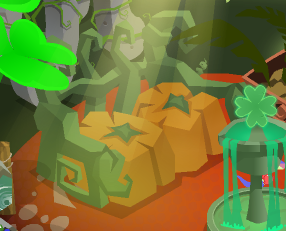 To me, this Pumpkin Chair looks more like a couch than a chair, don't you think?

I bet it was a prize from Twists and Turns, a seasonal Adventure from the month of November 2014. Prizes like those were only released to a few players, making it "rare" in some way. o.o

Still, it could be just another unreleased - or hacked - item.

The next unreleased item was discovered by Mimi5000. It's called...

Ooooh. The name's so scary it's practically giving me the chills. owo

The icon looks a bit weird, but on the bright side, it looks pretty stylish on that panda! XD

Another good thing about this item is that's it's Non-Member! Hopefully they will make it to the shops, because one more Non-Member item means one more pinch of happiness. c:

It's always fun to get a sneak peek at AJHQ's business. Not that I'm not being nosy or anything... pfft, what are you talking about? :P

Before I end the post, I just need to give you a quick notification. I will be posting Round 7 of the Lucky Fashion Show later, so stay tuned!

Alright, it's about time for me to go. I leave you with nothing but a signature. Bye-bye!

Posted by gingy gingy at 2:57 PM
Email ThisBlogThis!Share to TwitterShare to FacebookShare to Pinterest