Hello! Today is Rare Item Monday! That means this week's RIM is... 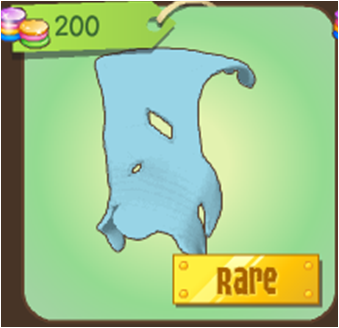 So, if you've got the gems for it, which I hope we all do, be sure to purchase this worn! It's a worn to be cherished forever!

Here's another heads-up for the upcoming affair this Wednesday: 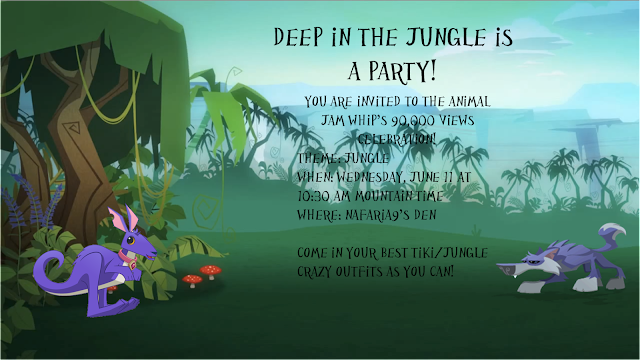 Update: The time of the party has been changed to 4:30 pm Mountain Time.

In all honesty, I agree that 10:30 am was the biggest flaw to the invitation. Now we just have to see how the actual party goes. :P

Recently, my friend was playing The Claw in snowyclaw's den. She received a red crocodile plushie, which reminded her of Breadstick, a character in an old plushie comic series.

She thinks it's some kind of omen, but it might as well be a coincidence, too.

I didn't have anything else to talk about, so I just threw that up there. Lol.

Wait a second! I think I should talk a little bit about the mysterious "blue worn".

Back in the olden days, namely Beta Days, worns were sold for the Night of the Phantoms. They only came in four colors: pink, green, black, and cream.

Suddenly, two years later, three other colors appeared: faded, chalky blue, red, and purple. Only a few Jammers had them, and boy, weren't they worth TONS OF BETAS!

Cowsandlightbulbs owned the first brown worn, while a strange picture of a blue worn was taken by Pizzadrop.

AJ's style of art has obviously changed the past year, so could this worn be the worn sold today?

Yet the worn's shade of blue is slightly darker than this one's. Like I said, the style of Animal Jam art has evolved.

Also, one more thing before I end the post-

There are two Rare Worns now. The Leap Year Party purple, and this icy blue RIM.

See ya! Check the Epic Dens list, it has been updated and fixed!

Posted by nafaria9 at 10:23 AM
Email ThisBlogThis!Share to TwitterShare to FacebookShare to Pinterest