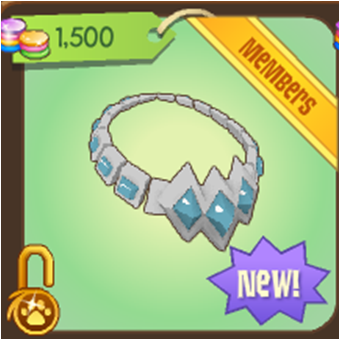 It's a gorgeous piece of jewelry. Though, the flaws are the price and the Members-only detail.

Today, the 90,000 views party invitation will be posted! I changed my mind about doing a contest for this blog achievement.

Evidently, Jammers have been debating about how Animal Jam is focused on money. Their solution, in this case, is to bring back the Beta Days.

Now, most of you know this, but the reason Beta Days were even here was for one purpose: to TEST AJ.

Beta Days didn't have a lot of features we have now. During this testing period, education, learning, friends, and fun was the main point. AJHQ wasn't worried about making the business bigger yet.

Well, after the few months Beta lasted, AJHQ then decided to crank things up. They added Membership attributes to the game, and soon the trading system.

When those were introduced, the Beta Days ended, more players joined, and the basics of Jamaa changed.

The world can be a sweet place, but if you visit society you'll know it's mostly about technology, money, greed, and super salty fries.

Jamaa only changed because of the people that were playing it.

Whenever somebody that's addicted to the world's social part signs up for AJ, they bring the world with them.

Because of this natural consequence, scamming and hacking are increasing. The world is beside the scammers and hackers.

You see, we don't need to bring back the Beta Days just because there wasn't scamming.

We only need to bring back the caring and loving people.

So next time you say, "Ugh! I am so sick of this unfair discrimination against Non-Members! We should bring back the Beta Days!", think again. If we can revive the Jammers, we can revive Jamaa.

Posted by nafaria9 at 7:39 AM
Email ThisBlogThis!Share to TwitterShare to FacebookShare to Pinterest