Good day! Welcome to the Animal Jam Whip for another post! ^.^ 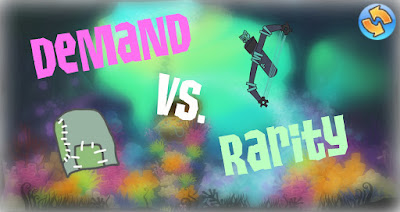 Today we're going to be discussing the differences between trading by demand and trading by rarity.

Trading by demand is when you trade by what people want. Most people nowadays are hungry for headdresses and spikes.

Trading by rarity is when you trade by how many of a certain item there are in the game. There are only a few beta eyeballs in the game, but they're not very sought after.

Over 50% of Jamaa's population trades by demand. Spikes have been popular for so long because they're a cool neck item and everyone wants one. Basically, if you don't have a spike, you don't stand a chance in the trading world.

Sometimes random items will randomly shoot to the top of the rarest rares. For example, whenever a famous Jammer starts to hoard a certain item, the rarity of that item immediately increases. It's just society.

Trading by demand can create a bend in the community and will often mess up the rarities of other items. Trading by rarity keeps things fair and square. But because everyone trades by demand, it's pretty much your only choice.

So, which do YOU trade by? Demand or rarity? Or do you just not trade at all? Let me know!

Thanks for reading! I hope this post was of use to you. :)