I don't know whether or not I'm going to be continuing this series or not just because it's getting kind of boring for me to type up these posts and I'm also running out of people to post about. :/ Oh well, we'll see how it goes for the next couple of weeks.

Back in 2011, 2012, and a bit of 2013, madjaster was extremely famous and popular. He was the leader of a huge AJ Clan and, like how there are always people in WootMoo's den, there were always people in his den, roleplaying. He also was well-known for his rares. 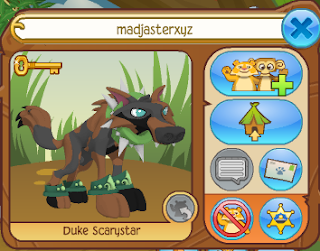 He got banned multiple times during his time on Animal Jam, despite the constant username changes.

I don't think madjaster even plays Animal Jam anymore. Some say he quit because he was sick and tired of the large amount of publicity he was getting. Others say he got bored of the game and went to college.

Whatever the reason, he still has an account and people are still upholding his legacy by roleplaying in the nice Clan area he's set up. :)