The Mysterious Lines of Power Have Been Here All Along

Today, we're going to be talking about the peculiar lines of power that have been spotted running throughout the land of Jamaa. Ever since the solar eclipse, weird things have been happening, including the Zios statue ''reviving'' itself, and the Forgotten Archives being unlocked and available for exploration. Now, just with the most recent update, strange, blue lines carrying an ancient power source have suddenly appeared, but before we get into that, we have a few other items of business to cover.

Firstly, CHECK OUT THIS GORGEOUS MASTERPIECE BY SARAHKEY8!!! 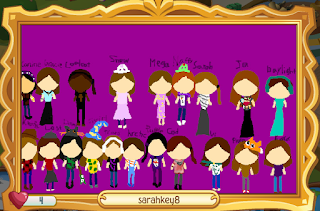 It's all of the AJ Bloggers! I don't know how I didn't see this earlier (perhaps I did, but just had a huge brain fart and don't remember it), but nonetheless, it's BEAUTIFUL! Great job, Sarah! 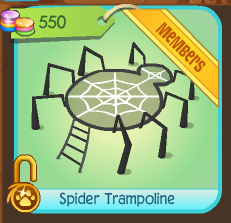 Aaaaand the secret item found in AJHQ's customized Epic Haunted Manor den is the Spider Trampoline! I believe it was about this time last year that AJHQ started this little trend of releasing secret items that can only be purchased by clicking on it in one of their pre-designed dens. Nice! 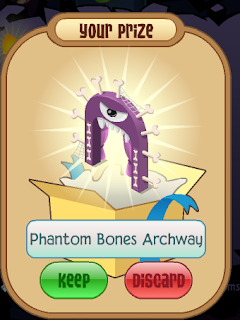 Now that those things are covered, let's discuss those bizarre lines of power again. In the Forgotten Archives, there is a series of journal entries and excerpts from old books scattered around the room.

On the second floor, however, there is an interesting carving on the wall, which looks like some sort of map. When you click on it, one of those excerpts pops up, along with a picture of the carving. 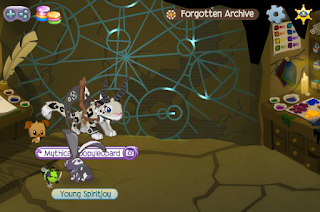 This map must show where all of the lines of power run through Jamaa, and how they are all connected.

You may not realize it at first, but we've seen this map before. It's been around for a few years.

You can find it in the floor at the center of Greely's Hideout den! 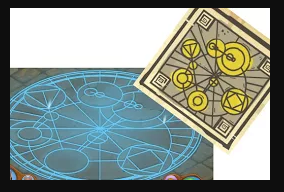 (picture from a Google+ user; does not belong to me)

What could this mean? Does Greely have something to do with the lines of power? The excerpt mentioned how the lines of power could be used for both good and evil purposes. Is Greely trying to discover how to misuse the lines of power, or has he already found out how? Let me know what you guys come up with in the comments.