Hey Jammers! A few posts back, I asked you to comment some AJ dares for me to do, so here I am today doing your dares! :P

If you commented a dare after sarahkey8, then unfortunately, yours will not be featured in this post. However, I will make sure to get to yours sometime soon! That means that everyone who commented a dare before Sarah (including Sarah herself) will get their dare done today, by yours truly. *bows*

Without further ado, let's get started!

The first dare I decided to try was to buddy Cherrypie43. Sadly, this dare was a fail because Cherry did not have her buddy requests on! :( Cherry, if you're reading this, turn your requests on (I'll make sure that mine are on as well) and I would love to be your buddy! 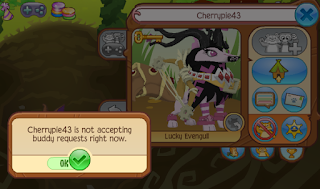 The next dare was requested by a good friend of mine known as Violet. She told me to go to dress up a penguin to look like a human, then go to five different rooms, dance, and scream ''I AM A CUTE PIECE OF HUMAN. WATCH ME JIGGLE AND MOVE!'' 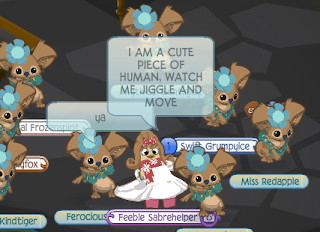 The first stop was at Julian2's den, aka the Spinnyboi Grand Central Station. At first they gave me a little bit of recognition by dancing along with me, but then things quickly started to get out of hand. 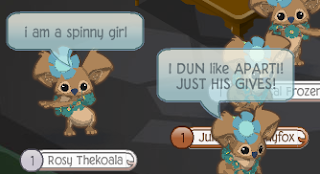 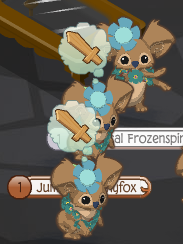 Yeah... once I saw those sword emotes, I knew it was time to book it outta that place. I just hope they don't find me in my sleep.

The next stop was at some random girl's fashion show. Once I started to shake my booty and show off my moves, she very strictly informed me and the others that were there that if we were not at her den to compete in the fashion show, she would be locking all of us out. 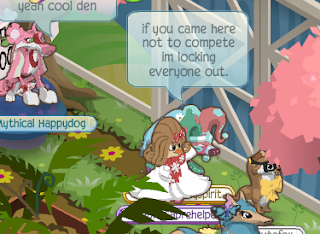 Someone was feelin' a bit grouchy today, eh?

The third stop was at my buddy misterfrizzy's den. He was doing a bit of trading with some of his other buddies, and you could tell that he was pretty busy and wanted nothing to do with my intense jiggling. 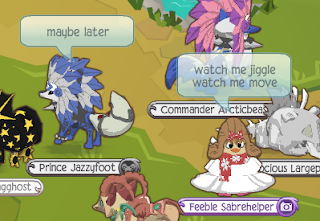 The fourth stop was the Lost Temple of Zios in Aldan. Like I suspected, I didn't get any priceless reactions. People just continued to trade and do what Aldanners do. 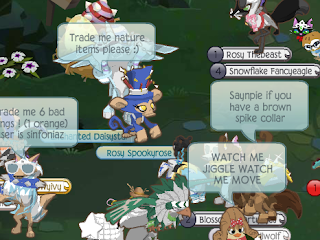 The fifth and final stop was Jamaa Township in a random server, and I didn't get any reactions this time either. Oh well!

I'd say this dare was maybe half successful. The first stop was definitely the best. Wouldn't you agree?

The next three dares were requested by sugarcat2. First, I had to go to Jamaa Township with a big crowd and yell, ''I AM A POTATO. WHOEVER READS THIS TURNS INTO A POTATO.'' 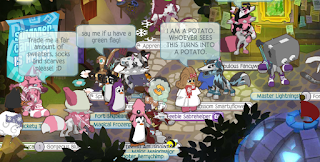 Everyone just ignored me and went on with their lives. :,( So, this dare was a fail, I suppose.

The second dare by Sugarcat was to tell people I was an AJHQ worker, and honestly, I thought it went pretty well! 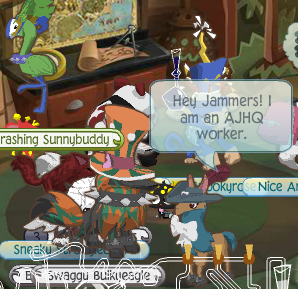 Some people laughed at me, but you what they say - the haters gonna hate. 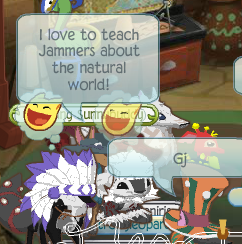 Apparently, I REALLY convinced a little blue monkey HARDCORE that I was indeed an AJHQ employee, so they told me their wood floor got scammed and they desperately needed my help. 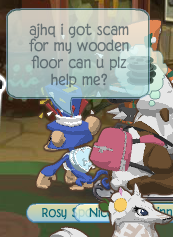 The last dare by Sugarcat was to sing a song. 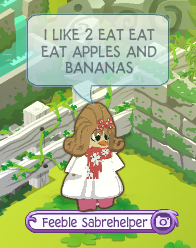 Transions gave me a dare as well. She told me to go to five random people's dens and say, ''If you were a booger, I'd pick you first.''

This one was probably my favorite dare to do, since the pickup line is so cheesy and bad. I was laughing the entire time. :P

Anyways, I decided to stop by Frizzy's den again, and his friends thought it was hilarious. 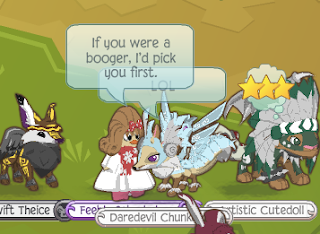 Then I went to a random girl's den. She was trying to trade in Aldan, so I was probably wasting her precious trading time. Oh well! 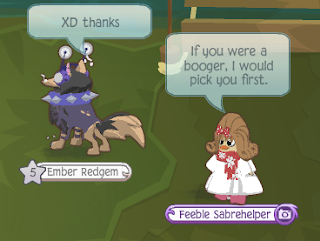 After that, I went to a random bunny's den. Everyone seems to be liking this corny joke so far! 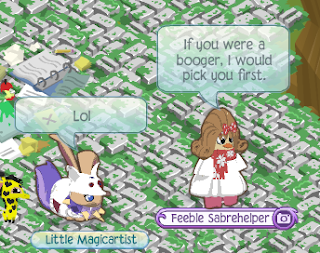 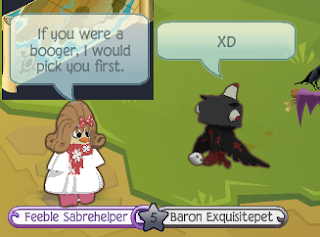 And lastly, this rabbit said she was ''flattered''. 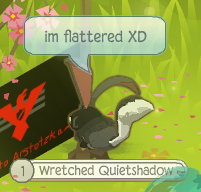 The final two dares I will be doing today was requested by sarahkey8. She told me to go to Jamaa Township and yell, ''APARRI IS THE WORST. GELLYJONES IS THE BEST!'', and see how people reacted.

Surprisingly enough, not too many people disagreed with me. 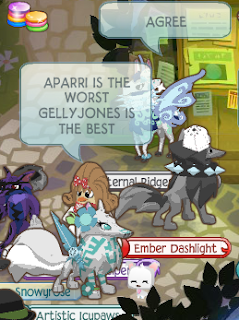 The other dare Sarah left for me had something to do with smelly feet, but I didn't get any reactions at all, so I just decided to not screenshot it. :P

And there you have it! I really hope you enjoyed reading this post as much as I did making it. I will get around to doing some more AJ dares in the near future. AJ dares are a lot of fun. :D