Yeah, I know Mondays aren't typically the happiest day of the week, but I'm just trying to keep the positivity flowing. :P

Today's post is going to be rather laid-back, since there really hasn't been much going on in the Animal Jam community at the moment.

Speaking of which, that reminds me - whatever happened to those Wild Weekend updates? We used to get them every so often, then they became more consistent and popped up every other week that we didn't get a major update, and now they've disappeared again. We haven't had one for two times in a row! I wonder if it has anything to do with the Zios statue being revived. Perhaps AJHQ is too busy planning and preparing for whatever they're doing with Zios that they haven't had time to do any Wild Weekends. Let me know what you guys think.

Anyway, I recently received some epic art from my good friend sarahkey8! 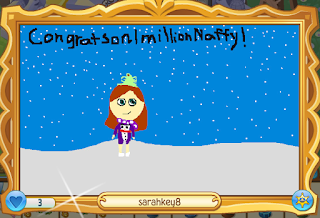 Aww, it's me dressed up as my deer! Thank you so much, Sarah!

Also, the other day when I was at the Summer Carnival, I noticed something interesting. 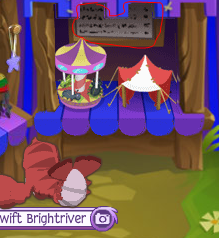 Do you see that little board above the den item shop? It has a bunch of strange symbols on it, similar to things we've seen before on other items, like chalkboards, for example. Based on how the symbols are set up, my guess is that it shows the prices of the items, but since the sign is so small, it's pretty difficult to tell what it could be.

So, in conclusion, what are your thoughts and ideas on both the Wild Weekend situation and the sign? Comment them down below!

Thanks for reading. Stay safe and play wild!