History of the Zios Statue

Hi there, Jammers! Welcome to the Animal Jam Whip blog.

Ever since the Zios Statue was mysteriously somehow restored back to its former glory by the solar eclipse a few weeks ago, I've been wanting to make a post on how its changed over the years, and what we can possibly expect of it in years to come. 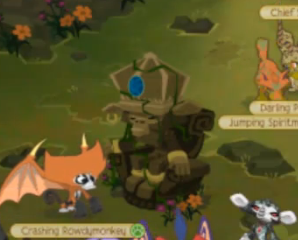 During the beta testing period of Animal Jam, a statue of a monkey with a large crown, gold bands on his ankles and wrists, and one earring sitting in a throne was in the place of the ''revived Zios'' that we see now. You can actually purchase this statue from the Beta Party, which usually comes around every July or August.

Notice the big, blue gem in the monkey's crown. Could it possibly be an early version of an Alpha Stone? What do you think?

After beta testing ended, the monkey statue was replaced with... this. Most people call it the Zios Pit, so that's what I'm going to be referring it as. :P The Zios Pit stayed like this and was left unchanged for a VERY long time, until a certain update that came out a few weeks ago, which gave us... 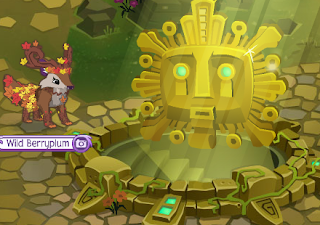 Yep, the Revived Zios. Apparently the ''pit'' was actually an entrance to a secret hideout room for the Sky Father himself all along, and we've barely just been given access to explore it.

I used to think that the monkey statue was really Zios in his true animal form before his great fall (seriously, who does Zios think he is? Humpty Dumpty!?), but we don't know for sure if Zios was even an animal at all in the first place. Also, I used to have this theory about how Zios accidentally released a swarm of phantoms that were supposedly locked up in the pit he fell into, but that's been proven incorrect now that we know the truth.

Zios is definitely a shadowy dude. In a good way, I guess.

Thanks for reading. Happy jamming!