My Thoughts on the Return of River Race

As most of you know, Animal Jam updated several days ago. In my opinion, I quite enjoyed the update. It gave us a good amount of new features, such as the Liza's Garden den and the Fast Foodies mini game, as well as a decent number of returning features. But the thing that really got a bunch of Jammers upset was the sudden return of the River Race game den item. 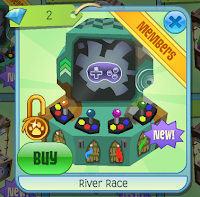 Yup, that's right. You can now purchase the River Race arcade game for two diamonds in the Diamond Shop.

So, why is everyone frustrated over this? Well, when the River Race game item was taken out of stores (along with the main route of access to the game), it became pretty rare. People traded crazy amounts of rares for this item. Now that it's back, the rarity of the item has decreased tremendously.

Allow me to share with you my thoughts on this situation.

Honestly, I could care less about the rarity of the actual item. I'm not a very big trader and never have been or will be, and I get why a lot of Jammers are disappointed, but if you think about it, the return of River Race might actually be a good thing. Although the game itself never technically ''left'', now a bunch more people will be able to play River Race and enjoy it without having to go to someone else's den who owns the item to play it.

I have to admit though, I'm still a bit confused as to why they didn't just add River Race back to the game selection panel and/or the dock in Jamaa Township where it used to be.

Anyways, that's just what I think. What are your opinions on the return of River Race? :)