Hi Jammers! Today we are going to be talking about salamander gills. No, not the actual gills you see on axolotls - the gills that serve as an underwater clothing item in AJ.

Now, like most underwater items, for a while, people didn't even know these existed, and, if you're one of these people, here's what the salamander gills look like.

For some odd reason, out of the blue this item became incredibly valuable and sought after. A lot of rare-collecting Jammers were offering beta den items, spikes, and lots more for these salamander gills. But how come one moment these are super insignificant to the trading world, and suddenly very popular the next?

These are what I like to call ''hoax rares''. They're certain items that only become ''rare'' because of a variety of wishy-washy reasons. For example, take ibex horns. A few years back, a dude named Nemachu made a joke video of one of his storage accounts trading a glitched ring for a pair of ibex horns. Once people saw the video, everyone went CRAZY for ibex horns because, according to the video, they were extremely rare. As it turns out, Clark Stacey, the CEO of WildWorks, confirmed that the ibex horns are seasonal items and would be returning the following year for the Night of the Phantoms celebration in October, and sure enough, they did.

In conclusion, ibex horns were never really rare in the first place, and that's why they're called a hoax rare. Hoax rares often destroy the trading economy and mess up the rarities of other items, and that's not good.

Back onto the topic of salamander gills. Recently, salamander gills were re-released into Bahari Bargains, and this caused a lot of people who traded tons of rare items for them to be upset. 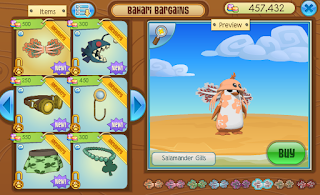 So, the moral of this story? Don't get involved with hoax rares, and don't believe everything you hear.

Thanks for reading, bye!