Hi people! Nafaria here! Today I'm bringing some big news into the house, so sit down and listen up!

Recently, a new, mysterious item has popped up in Jamaa, and it's all the latest craze. It's called a masterpiece token, and it's owned by a Jammer named Yikezz (unless the item was traded away to someone else by the time this post is published). 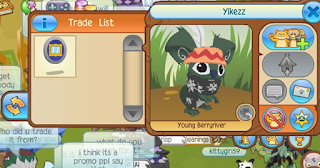 As you can see, it looks very similar to the horse coin, which was a very weird but cool unreleased item that was popular in 2014 before AJHQ removed it entirely from the game. It even spins around like the horse coin did when placed in a den. However, instead of a picture of a horse on the coin, there is a graphic of what appears to be a masterpiece.

The strange thing about it is that it's a promo item, which means you can only get it by redeeming a code of some sort or trading.

What do you guys have to say about this masterpiece token? Leave your thoughts in the comments!