Hi everyone! ^-^ Recently a fairly well-known Jammer named Alistairz posted a photo on his Instagram account of his sheep, but there's something a little bit odd about it. 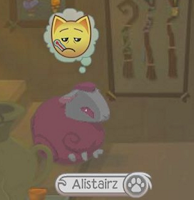 The face has droopy eyes and a frown with a thermometer sticking out of its mouth, so you can easily assume that it's a sick emoji. However, the emoji isn't available in the emoji selection list.

So, is this a legitimate, unreleased emoji that Alistairz somehow has access to, or is this just a really good edit?

Alistairz claims that he, along with a bunch of other famous Jammers, were given this emoji as a gift from AJHQ. But if AJHQ really did give them that sick emoji, why did they do so? What is the purpose of that? Did they give them more than one emoji? Could we possibly receive a handful of new emojis in the next update, and the famous Jammers are just testing them out for now?

What do you think?

Thanks for reading, adios!