How to Get Into the 2012 New Year's Party GLITCH

Hey Jammers! The other day my friend Sonic showed me a cool glitch that you can only do for a little while longer, because it requires this year's New Year's Party. So, I thought I would show you guys how to do it! 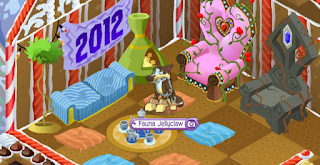 There's not really much you can do, except for hanging out and chilling. You can't purchase any items or go down the slides, sadly. But it's still pretty cool to get a glimpse of what the 2012 New Year's Party looked like. And, if you played in early 2012, you might even get a small wave of nostalgia!

I hope you found this post interesting. Goodbye!
Posted by gingy gingy at 12:00 AM
Email ThisBlogThis!Share to TwitterShare to FacebookShare to Pinterest