Hey everyone! How are you? I'm pretty good, considering the fact that my friend is coming over today! Today's new item is an Arm Brace, found in the Medical Center. 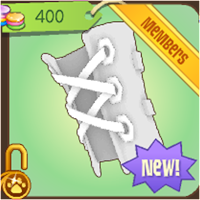 Useful? Also, don't you think that the casts kind of look like knee-lace gloves or something? :3

Anyway, mailtime MAY be filmed today. If my friend only stays for a little bit, maybe in the night I can film it. We usually play until the night, so if that is the situation, you have one day left to send stuff if you would like to! It would then be filmed Saturday afternoon. My school is having a 5K run, and I have to help. :I

Here's a glitch I found! 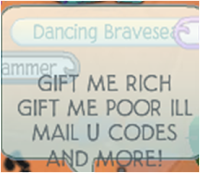 It COULD also be a scam. You never know.

Speaking for the title....

Sad stuff happened last year on Friday the 13th. Mom says not to talk about it. It gives nightmares. O.o

Cross your fingers/paws/hooves/flippers/french fries that nothing bad happens today!

It's just because the Mayans believed the world would end on Friday the 13th, and that there would be no consequences (different religions believe different things). THAT'S why bad stuff happened.

Posted by nafaria9 at 7:05 AM
Email ThisBlogThis!Share to TwitterShare to FacebookShare to Pinterest