Hey Jammers! Naffy here. I apologize for not posting about the most recent update yesterday when it was released, so that's what I'll be doing right now. I was hanging out with my cousins all day. :P 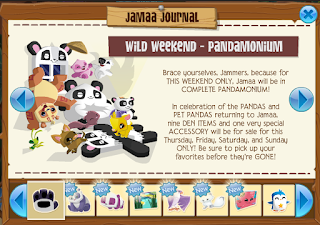 Ah, yes! Apparently during my short vacation earlier this week, a bunch of panda-themed items were accidentally released into Jam Mart Furniture, then quickly taken back out. A lot of people were really confused by this, because they were only available for a short amount of time, and they were extremely cheap! Luckily, AJHQ put a halt to all of the chaos by announcing that they would return in the next update, and they lived up to their word. So, to celebrate the return of pandas, this weekend only, you have the opportunity to purchase a variety of super awesome panda items! 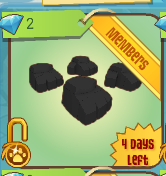 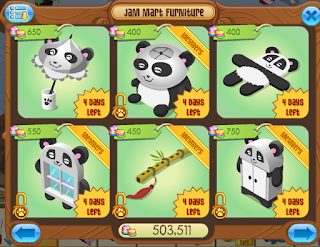 That panda bean bag is so cute and fat! I just wanna squish it! Hehe! 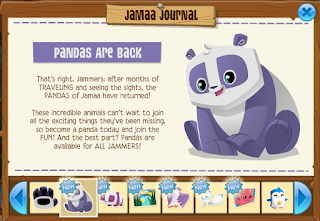 Like I said before, pandas have returned! Usually when this occurs, a new minibook is released for that specific animal, but since there is already a minibook for pandas, this did not happen. 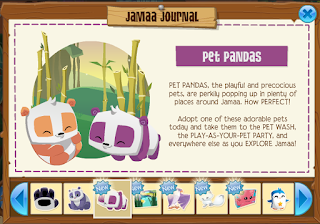 And why not add even a little bit more of the panda fun to this update by bringing back pet pandas!? Aww, they're so cute! <3 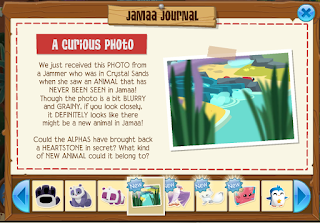 This is probably one of my most favorite parts of the update - a clue to a new animal! According to the article in the Jamaa Journal, the picture is described as ''blurry and grainy''. I'm assuming the new animal is hiding behind that rock over there, and to me it looks like...

Or, more specifically, a pet gecko.

Could geckos be coming to Jamaa? o.o

I know for a fact that some people believe it's a flamingo, and the gecko head is just there to throw us off. Besides, what about those pictures that were leaked not too long ago? Could flamingos be the new animal, or are those pictures just very good edits? I wouldn't be surprised if it was a flamingo, honestly, because they were mentioned in a new animal poll a long time ago.

What do you guys think the new animal will be? 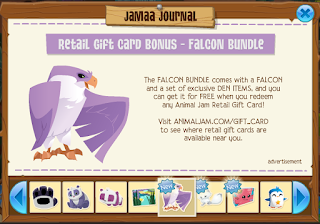 Ooh! A new retail membership gift card bonus! It's about time for a new one of these. Too bad I used some cards several weeks ago. Now I'm tempted to buy more just to find out what the cool items are. 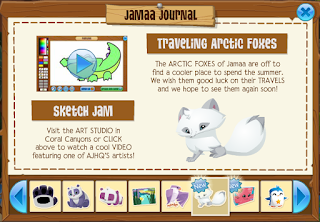 A new Sketch Jam video is out, and arctic foxes are now traveling.

Quick question... have arctic wolves ever ''traveled'', ''explored'', or ''migrated'' before? If not, I can see why. They're the most popular animal in all of Jamaa, and it would make a handful of people upset if they left. 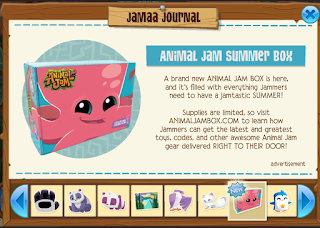 And now for my other most favorite part of this update - THE ANIMAL JAM SUMMER BOX!!! EEEEEKKK!!! The cover of the box looks amazing, and I can't wait to receive my box and see what's inside! ^-^ The spring box was great, and I hope the summer box will be just as awesome.

Remember, I will post a review of the box on this blog once I receive it in the mail! :)

I think that covers the update, folks. Oh, I almost forgot - the Team Zios items now have a rare tag on them. AJHQ promised that whoever won the VidCon challenges (Team Mira or Team Zios) would get their team items to have rare tags in the next update. Since Team Zios won the competition, the items have rare tags.

Thanks for reading, and have a great day!