The 2017 Hatapalooza event was lots of fun. It went on for about two weeks, and during that time period you had the opportunity to choose from a large variety of hats for your animal to purchase, each sold at three different carts hidden around Jamaa. 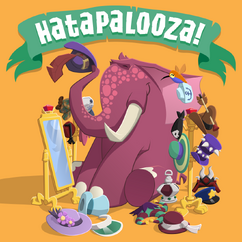 I find the Hatapalooza event quite interesting, and so today I thought I would make a little post about the history of it all. ^.^

Hatapalooza made its debut in January 2013. For some reason, I always thought it was January 2012, but as I was researching for this post it appears I was wrong all along! :P

Anyways, when Hatapalooza came to be, at first a lot of people really liked it, until they discovered that top hats were for sale. 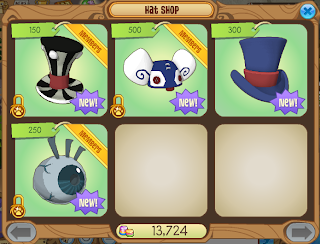 Everyone went nuts. Back then, (before the re-release of top hats of course) top hats were extremely rare. They were like the glitched rings and beta tiaras of the early days. Some Jammers were happy that they could finally get their dream item, and others were not so happy that the value of their prized possession(s) had decreased by a ton.

After several weeks, Hatapalooza ended, and over time top hats began to gain back their rarity, but not by a lot. Even now (also before this year's Hatapalooza), top hats aren't the rarest item in Jamaa, and they're definitely not as popular as spikes. They are still fairly valuable and sought after, though.

A year later, in July 2014, another Hatapalooza rolled around. This time, things were different. Hats weren't sold in carts or anything like that. Instead, all of the hats in stores at the moment were 50% off. Nothing too special, I suppose.

Finally, we get to the Hatapalooza of this year, 2017. The original cart tradition that started it all returned, and we got a second re-release of top hats, as well as a couple of brand new hats, too.

Welp, that's just about it for today, Jammers. What is your favorite thing about Hatapalooza? Let me know your thoughts in the comments! And, if you enjoyed this post, comment what you liked about it and tell me if I should do more history posts like this in the future!