I hope you're all just as excited for the new animal that was announced last week as I am.

On the same page where the announcement was made in the Jamaa Journal is a hint for what animal the new animal could be. This hint was unique - it had some interesting markings carved into a rock. 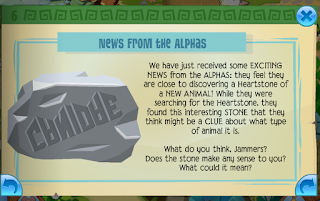 Most of the AJ community has agreed that the markings spell out the word ''canidae'', which is the name for the biological family and lineage of species like dogs, wolves, and foxes.

Since we already have wolves and foxes, a lot of people assume the new animal might be a dingo, jackal, or otherwise.

However, I predict the new animal will be a fennec fox, and I have three reasons for this conclusion. Obviously, one is the fact that fennec foxes belong to the canidae family. The other two are slightly more disguised.

Last weekend, only a couple of days after the update was released, Animal Jam uploaded a new Wild Explorers episode featuring Cami to their YouTube channel.

And what do you know? The episode was on fennec foxes!

The third and final reason might not be as structured as the others, but in early September of 2016, pet fennec foxes were added to Play Wild. I'm not sure if AJHQ was planning to release fennec foxes to the regular world of Jamaa from that point on or not, but I mean, still...

Anyways, those are my thoughts on what the new animal is going to be. What do you guys think?

Thanks for reading! See you in Jamaa!