*The update post will be posted later tomorrow instead of this afternoon. Sorry for any inconvenience this may cause!*

Hey Jammers! Yes, I will not be able to post about the upcoming update until tomorrow, and I apologize for that. Hopefully this post will interest you guys enough to make up for it. :P

Today, we're going to be talking about the animal creation process for Animal Jam. Tons of work is poured into the creation of every single animal that comes to Jamaa. Recently, the lead character designer for AJ, Taylor Maw (who I also mentioned earlier this week), made a post on social media describing this long and excruciating process. Most of the information from this post comes from his post.

Each animal takes about three months to make, and also takes lots of team effort and talented team members for that matter. The animals are built using a 3D modeling program called Maya. Below is a picture of an artist using Maya to construct a monkey. 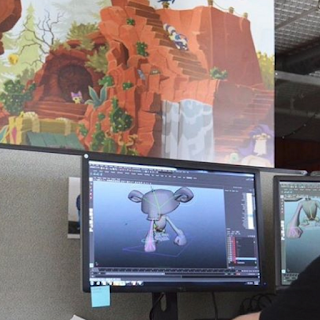 After the base of the body is built, eyes, patterns, and nearly 800 accessories are custom fitted for that specific animal. Boy, that must take a really long time... whew. o.o

Then, artists illustrate the animal in a program called Adobe Illustrator to bring it to life through game and marketing assets. For example, do you remember the coyote that sits on the background of the current Animal Jam home page? That's basically what this part is talking about. ^.^

Next, programmers develop the animal into the game and create actions for it, like how it walks, sleeps, plays, etc.

Making a new animal is hard work, but it's all worth it in the end!

Thanks for reading! Tell me what you think of the animal creation process in the comments. Bye!