Hello everyone, Naffy here. I know I promised to make another AJ toy review post today, but that has been set aside for something I believe is currently slightly more important. Don't worry, though, because you'll be able to see the other toy review tomorrow. :)

Now, as you can see, this is no ordinary, typical daily post. This post covers tendentious topics including the latest drama that's been buzzing around the Animal Jam community. I don't normally make posts like these because I prefer keeping this blog a happy and positive place, but I figured I should probably discuss this certain subject with you guys.

So, without further ado, let's begin.

It all started with an Animal Jam social media account. This account has now been deleted, but if I remember correctly, the username was aj.gifterss. If you didn't already know, there's this trend on AJ social media where people make separate accounts, collect rares, and then send them away to random strangers who follow them or comment on their posts as a way of giving back to the community and just overall being generous.

It seems like a pretty nice concept, right? You know the old saying, ''giving is better than receiving'', or something along those lines. But in this case, there's something VERY odd about Gifterss, and I'm about to explain why...

And they had a pretty large stock of it, too. By the way, some of this information was given to me by my friend misterfrizzy, so kudos to him for that.

Obviously, having such a big amount of rares to simply GIVE AWAY to totally random people is a bit fishy, don't you think?

After people started to realize that something was up, rumors were being spread throughout the community. These rumors claimed that the account belonged to a group of people who were actually using a secret hack to duplicate items and make more of them known as ''duping''.

At first it might sound like a harmless idea, because what easier way is there to get people their dream items? But... if you think about it, it becomes clearer that perhaps this isn't the right thing to do. Firstly, it's hacking, and you should NEVER hack ANYONE or ANYTHING for ANY reason. Even though it's ''just a kid's game'', there will be consequences. If you get yourself too caught up in the act, you'll find yourself facing even BIGGER consequences later on in life.

Secondly, it messes up the rarity system. Take beta arctic hoods for example. As more and more hoods are being illegally created and distributed, the value of the item decreases as quickly as the duping is occurring. The result? A screwed up economy of virtual accessories and a bunch of angry Jammers.

After a bit of investigation, it turns out that AJHQ supposedly discovered who the ''dupers'' were, and permanently banned their accounts within an instant. 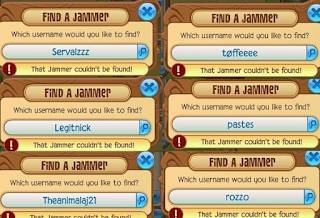 Did AJHQ make the right move? Was everyone that AJHQ banned guilty, or did they make a mistake and ban a few innocent ones? We don't know entirely for sure.

One thing I do know is that it's wrong to dupe. Don't follow in the footsteps of the dupers.

That's all for today. Remember, stay safe, jam on, and play wild.