One of Jamaa's most popular games is Best Dressed. It's basically a fashion show/dress-up game where you must dress accordingly to a theme that is given to you using items, colors, and patterns.

Today, I'm going to be giving you some tips and tricks that I've found that hopefully might work for you as you play Best Dressed. :)

1. Use certain items, colors, and patterns to help make your animal look more like the theme that has been given to you. For example, if the theme is ''most like a firefighter'', wear a firefighter hat or some sort of helmet, and maybe even some armor if you've been handed the option. Use the fire pattern to symbolize what firefighters have to go through to save people from harm, as well as fiery colors like red and orange. 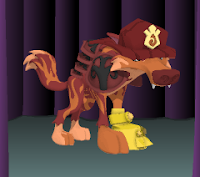 2. Even if none of your items match the theme, you can still try to make an appealing look by always attempting to keep your items, colors, and patterns the same color scheme. If people are voting for a person with a look that truly visually pleases the eye, then it's never a bad idea to play it safe and just make an outfit with matching colors.

3. If you REALLY want to grab people's attention, I suggest going big. Try using a bigger animal, such as an arctic wolf or elephant. The other Jammers are more likely to have their eyes drawn to an animal that stands out because of its size. Another useful trick is to use items that look big on your animal, or even animated items such as party hats.

4. Another thing I've learned about getting noticed on Best Dressed is to use a lot of emotes. Don't try to overdo it, or else you'll look desparate, even though we all know you're very desparate for those gems on the inside... just kidding. :P Using emotes lets others know that you exist and you're not some creepy bot that sits there and only uses an emote maybe once or twice in a few rounds. Also, try to use emotes that pertain to the theme. For example, if the theme is ''evil'', don't use a smiley face; use the evil face!

5. The final tip I have for you today is kind of a reverse psychology sort of thing. Instead of voting for who you think is ''the best dressed'', vote for someone who isn't dressed all that well. By doing this, you're not only reducing the chances of someone who has a great outfit of winning, but you're also making someone else feel good to get a vote!

I hope you guys find these tips and tricks handy. I spent a lot of time researching and testing these, sooo... yeah, hehe.

Thanks for reading! Keep on whipping!