Today we are going to be discussing a new piece of AJ merchandise that will be released very soon. Huge thanks to Hawkfrost429 for informing me of this!

The new Animal Jam toy is along the den set line, and it's called the Friendship Cottage. 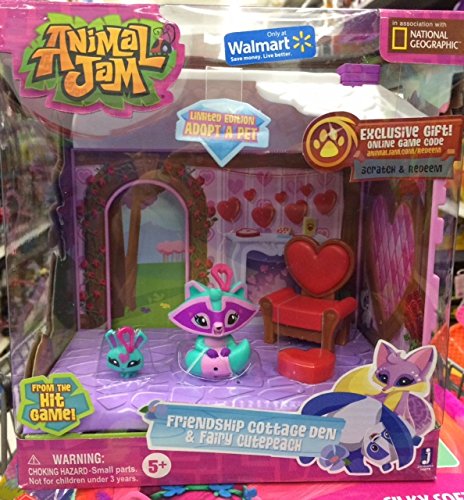 Right now, you can order it off of Amazon for about 40 bucks plus shipping and handling. I'm sure it will be a lot cheaper once it hits the stores.

Speaking of stores, this set is exclusive to Walmart, so that means you probably won't be able to find it in foreign countries or simply other retail stores where AJ toys are sold.

Now that we've cleared those things up, let's talk about what's inside.

Clearly, the toy comes with a Friendship Cottage den, similar to the virtual one. It also comes with a cool raccoon figurine, which is almost identical to the orange and purple raccoon that was released by itself in Series 1, but nonetheless, it's still pretty neat. The adorable bunny and heart furniture is great, too.

Leave your thoughts in the comments! Thanks for reading, bye bye!
Posted by gingy gingy at 12:00 AM
Email ThisBlogThis!Share to TwitterShare to FacebookShare to Pinterest