*THE PARTY IS TODAY AT 11:00 AM MOUNTAIN STANDARD TIME AT MY DEN! I MAY A FEW MINUTES LATE, BUT NO MORE THAN 15 DUE TO AN EARLY MORNING TENNIS PRACTICE, BUT I HOPE YOU GUYS CAN MAKE IT!*

*ALSO, THE CONTEST IS NOW UP AND READY FOR ENTRIES! CLICK HERE TO GO TO THE CONTEST BLOG!*

Hello Jammers! In a post from several days ago in which I discussed the latest update, I forgot to mention two things.

I don't know how I missed them, but once I discovered what they were, I realized they were actually the BEST parts of the update in my opinion.

The first best part is that the famous Geckos! song is now available in the Diamond Shop as DEN MUSIC. 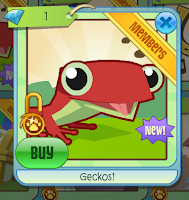 This is REVOLUTIONARY! Everyone loves the Geckos song, and it's awesome that we finally get to play it in our dens! :D

The second best part is that in honor of the National Geographic Bee, Temple of Trivia is on not double gems, but TRIPLE GEMS! 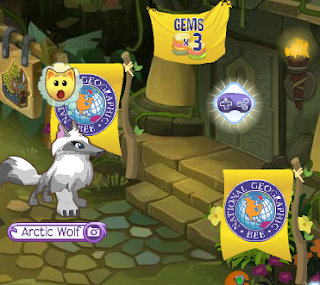 If you are in dire need of some extra gems, now's the time to get some! I don't think we've ever had a game on triple gems before, have we?

One more item of news before I end today's post: yesterday, Julian2 discovered a funny little glitch. When you put a chicken beak on a snow leopard, look what happens! 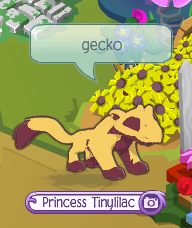 The snow leopard's colors change to a macaroni and cheese yellow, as well as the infamous magenta, or the ''glitch color''. Interesting!

That's all for today! Thanks for reading, and keep on whipping!