Hey Jammers! I hope you guys are having a fantastic day today. March is nearly here, which means the blog will be getting a fresh, new look soon.

Now, assuming you've all read the title, today we're going to be discussing the recent drama in the Animal Jam community that has caused a LOT of people to just... well, blow up, I guess.

I don't normally post about drama on this blog because I want to keep the AJW a nice and positive environment, but this series of events is too huge not to talk about. 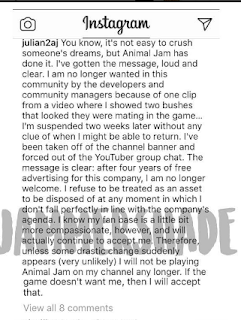 Not too long ago, Julian2 made a video about AJ WikiHow tutorials and jokingly tested them. One of the tutorials was very inappropriate, but Julian tested it out anyway. Because of his behavior, his account received a two week-long suspension.

Julian apologized for his actions numerous times, but he feels that AJHQ does not want him apart of the community anymore for his mistake. They removed him from a YouTuber group chat and even took him off of the Animal Jam YouTube channel banner that features other famous Jammers, or "Jambassadors", on it, including Aparri, WisteriaMoon, and more.

As a result of this, Julian was uncertain whether or not he wanted to continue making videos about a game that clearly wanted nothing to do with him anymore. However, after a lot of devastated fans crying in agony for the loss of their beloved ''king bean'' and controversy, Kate, the Community Manager from AJHQ, made a statement. 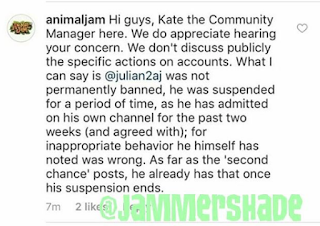 So, Julian is no longer considered a Jambassador because of what he did, but he is still allowed to play and make videos about Animal Jam as soon as his suspension is lifted.

The next morning, Julian brought his fans some good news. 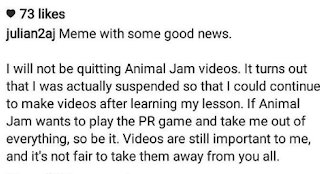 It turns out that Julian will be staying in the community after all! Hooray!

Even though Julian is technically still permitted to be involved in the community, there are still a bunch of people who are upset.

The question is, what do you think? Should AJHQ be merciful towards Julian and give him a second chance, or did they do the right thing by sort of ''closing him off''? Leave your thoughts in the comments.

Thanks for reading. Remember, always follow the Animal Jam rules, even if others around you are not. It's just the right thing to do!