THE SCISSORS ARE GONE + Monkey Expressions

Hey Jammers! Welcome back to the Animal Jam Whip! How are you all doing? ^.^

Well, today I have some interesting news to share.

About a month ago, I made a post about the evolution of the medical center and how it has changed over the years. At the end of the post, I included a rather spooky fun fact about the modern version of Gabby's Animal Hospital: there is a pair of giant scissors laying on the bed. 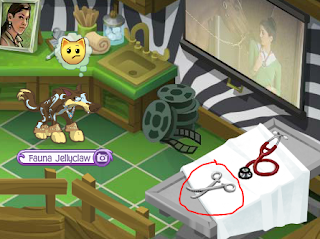 But just recently, AJHQ got rid of these scissors and replaced them with this weird silver sharp thingy... 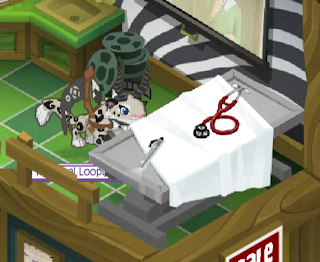 They must have finally realized that maybe, just maybe, a giant pair of razor-sharp scissors COULD be potentially dangerous. :P

I'm not exactly sure what that other item is, though. Whatever it is, perhaps it could just be as equally harmful!

Another cool thing I discovered was that the green monkey in one of the Friendship Festival loading screens sometimes changes expressions every now and then! For example:

I don't think anyone has ever pointed this out before, which makes it even more neat! :)

That's all I have on the agenda for today. Remember to keep whipping and play wild!
Posted by gingy gingy at 12:00 AM
Email ThisBlogThis!Share to TwitterShare to FacebookShare to Pinterest