The Evolution of the World Map

PLEASE ENTER THE 800K VIEWS CONTEST HERE! I MAY EXTEND THE DUE DATE UNLESS WE GET MORE ENTRIES!

Hey everybody! Welcome back to the Animal Jam Whip. In today's post, we're going to be briefly talking about how the famous world map has changed over the years.

During beta testing, I believe there were only four lands: Jamaa Township, the Temple of Zios, Crystal Sands, and Sarepia Forest (back then it was just called ''Sarepia").

Then, in late September 2010, just a few weeks after beta ended, Coral Canyons was released. Months later, in January 2011, Mt. Shiveer was released, and shortly after in February 2011 Appondale was released. The map looked like this:

In early fall 2011, oceans were added. At first, there were only three oceans: Bahari Bay, Deep Blue, and Crystal Reef. Later on, Kani Cove made its debut.

It wasn't until July 2013 when we finally got a new land, and that land was Kimbara Outback. Also in that same update, the world map got quite a drastic, cartoony makeover that caused a lot of controversy among the community...

After hearing a bunch of complaints, AJHQ responded by adjusting the map back into its original form.

And now, in February 2017, still without a new land that Clark Stacey had previously promised over a year prior to this post, this is what the map looks like currently. 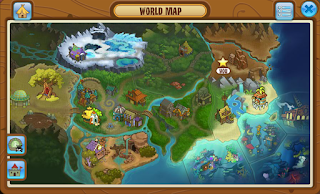 Well, there you have it! I hope you enjoyed learning about the world map and its stages of evolution over time. I wonder what changes the world map and its many side features will face in the future.
Posted by gingy gingy at 12:00 AM
Email ThisBlogThis!Share to TwitterShare to FacebookShare to Pinterest