Hello! This post is going to be similar to a post I made a couple of weeks ago. Remember how I talked about my animals and their old outfits? Today, I am going to be talking about how I received my very special purple glove.

Believe it or not, gloves were super rare back then. No one cared about spikes or headdresses; just gloves (and top hats). People went crazy for them because they were so sought after.

Well, since I was fairly new to Animal Jam, I had no clue that gloves were rare. Heck, I didn't even know what "rare" meant. Sometimes I wished it stayed that way. XD

Anyway, I was just finishing up a little painting of mine in the Art Studio when all of a sudden two wolves approached me.

One of the wolves was DarkDragonGirl12. The other wolf was Gwenandkat. 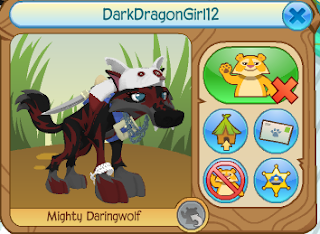 "Oh, well, we'd be glad to answer any questions you have!" they exclaimed with a smile.

Earlier that day, I was in Jamaa Township and saw a big crowd of Jammers dancing and hopping around shouting, "TRADE ME GLOVES!"

I thought to myself, I wonder what gloves are.

Now was my chance to get an answer!

So I asked them, "What are gloves?"

They explained the whole trading process to me and everything I needed to know about gloves. Dragon and Gwen were too kind!

When I was positive that Dragon and Gwen couldn't give me anymore wonderful advice or assistance, a Jam-A-Gram appeared in my mailbox. Yes, this was during the time Non-Members could still accept gifts.

Dragon had just sent me a PURPLE GLOVE. A GLOVE! And who was I? Nothing but an innocent, oblivious, brown Non-Member wolf.

And DarkDragonGirl12 had just sent me a GLOVE, one of the rarest items in the ENTIRE GAME!

Compared to people in the present, most Jammers won't even give a crap about new players. But this single act of kindness brought us three wolves together as best friends.

To wrap up this post, I will leave you with a small inquiry:

Do you remember a time when someone was extremely nice to you?

Posted by gingy gingy at 8:37 AM
Email ThisBlogThis!Share to TwitterShare to FacebookShare to Pinterest