Hi Jammers! Wow, it's been almost a year since I've done one of these kinds of posts last. I think it's time for another one; wouldn't you agree?

This time, I will be reacting to three different posts:

Let's just get this over with before I throw up or somethin'.

This post was made in December 2014. I was about twelve and a half years old at the time.

Okay, so someone pointed out this post on their blog: 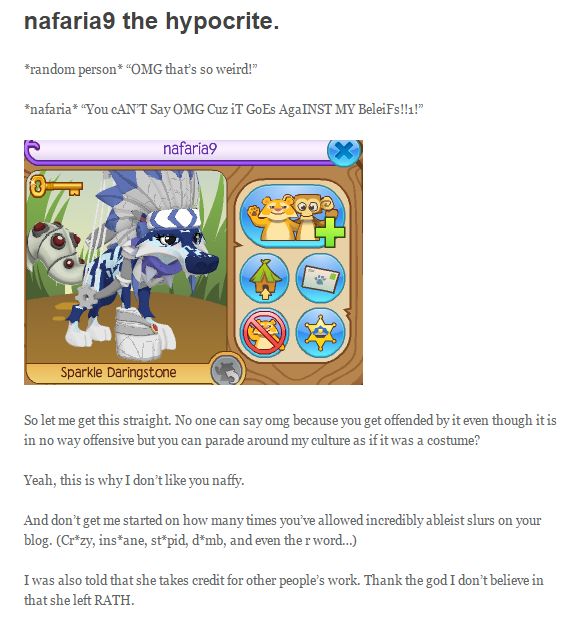 First of all, I NEVER said that you couldn't say it because it goes against my beliefs. I only said you aren't allowed to say "Oh My G*d" on my BLOG.

Second of all, I'm allowing it now because not everyone shares my religion, so they don't know if it's a bad word or not. Anything else will be strictly deleted.

Crazy, insane, stupid, dumb, retard, flip, freak? SERIOUSLY. Those aren't considered bad words where I come from, so if you hate them, don't read them. I'm respecting your opinion, so I ask if you respect mine.

If you think I'm a hypocrite, fine, then. But I can assure you, I left RATH with a reason. I GIVE credit to the people who I take pictures and videos from, and if I don't, I fix it.

If you think I'm an awful person, I don't care. :I

Allow me to start off by saying this: you are allowed to say ''Oh My G**'' on my blog, since to most people in the world nowadays, it is not considered a swear word. Any other swear words will cause your comment to become unapproved and deleted for good. Secondly, the word ''retard'' is indeed offensive, but clearly I had no idea when I typed up this post.

Now that that's out of the way, we can talk about the situation behind the post. Some dweeb decided to rant about how I'm a supposedly ''horrible'' person because I ''paraded around Jamaa Township, disrespecting the Native American culture by wearing a virtual headdress'' (back when I owned it, of course). Pfft. If only he could see what the community is like these days with their unhealthy obsession over headdresses!

He also called me a ''#awfulperson'', and told everyone that I plagiarize other people's work, both of which are not true.

Honestly, this post, and the post that was featured in the post, both kind of make me laugh. Besides, who cares what the haters say? Never let them get to ya.

Alright, I think it's time we move on to the next post.

This post was made in November 2013. My blog was only a little over a year old at the time, so you can imagine my blogging skills weren't perfect. They still are far from perfect, if we're being real here.

I'm really sorry I'm quitting. I guess I was kind of angry at the moment when I did that post. :( Anyway, to assure you, I won't be on as often as I would for the next few days. I'm terribly sorry I frightened you all like that. >.< I have had quite a bit of homework lately, and it might take a while. Boring homework at that, which no kid like me would enjoy. *rolls eyes at the thought of boring homework*

I won't be posting for the next few days because my parents supposedly changed my Animal Jam password because they think it might get in the way of my plan to complete my homework by Wednesday. I freaked out when I tried to enter my password in earlier because I thought I had been hacked or my account was glitch-locked.

Basically, the day before I typed this post up, I was having a pre-teen crisis. I was stressed out with homework, and my parents took away my Animal Jam account by changing my password so that I could finish it. *sigh* Just wait 'till you get to high school, little me.

So, at first when I learned that my password had been changed, I freaked out and thought I had been hacked. Then my parents told me THEY were the ones who changed my password, which only made me even more angry. In fact, I was so angry that I told everyone I was quitting, only to contradict myself the next day.

I wonder how many times I've told people that I was quitting and didn't actually end up leaving or anything. Maybe I'll make a post on that someday.

But for now, let's close off with the final post I will be reacting to...

Okay! I know I already made a post, but I just need to share with you an AJ wolf parity! It's to the tune of Home by Phillip Phillips:
Hold on to me as we howl
As we track down this unfamiliar prowl
Although our noses are stringing us along
Just know your not alone
Cause I'm going to make this pack your home


You don't see that everyday.

Ugh... eww. Would someone kindly give me a bucket to throw up in?

First of all, I used the ''your'' for the wrong purpose multiple times while typing up the lyrics. And I spelled ''parody'' wrong, too. >.<

This ''parody'' doesn't even make any sense. I'm not sure what stage my brain was going through at the time, but the evidence proves that it was absolutely... horrendous. *gulps*

Well, that's it for today. I hope you enjoyed reading my reactions to these three old, embarrassing posts. Tease me all you want. :P

(P.S. Do you like my new signature?)
Posted by gingy gingy at 12:00 AM
Email ThisBlogThis!Share to TwitterShare to FacebookShare to Pinterest