Some of the items that you see in shops around Jamaa that either haven't been released yet or are just different colors and patterns of the original item seem like they would make good actual items that you can buy. Whew, that was one heck of a sentence. I'm practically sweating. Just kidding...

Here are some items that I found in Jam Mart Furniture and Jam Mart Clothing that I think would make great purchasable den decorations.

The green ''blue'' rug next to the door, the sea green vase next to the orange fire pot, the solid colored flat couches, the alarm clocks and radios, the various pottery scattered around the room, the plaid, swirly, and chevron patterned mats, the desks and drawers, flat coffee tables, and even the recycling machine 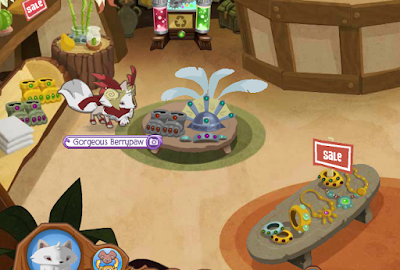 The gold and greenish-silver gauntlets on the shelf and round table, the jewelry on the oval-shaped table, the weird feathery fan head gear on the round table, and even the cute little yellow pear sitting next to the bamboo plant

These were just cool-looking items from the two shops shown above, but I'm sure there are plenty more items out there that would be nice to have in stores. Anything you think of in particular, let me know in the comments! ^.^