There's definitely a lot of shops and places to explore in Jamaa, and most of these shops have identical old-fashioned cash registers. I know there is one in the flag shop, which shows the official gem currency symbol on it (or at least that's what I think it is), and it's also the most detailed one according to my knowledge, so you can get a real good look at it.

The one in the Conservation Museum, however, has three numbers on the little tabs, and to me they look like a 1, a 5, and a 7. 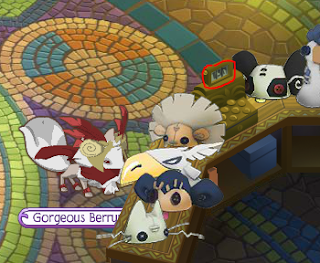 I'm not really sure what the numbers mean other than the total cost of a purchase, but you all know how much Animal Jam loves its Easter eggs. Perhaps there could be a bigger, more obscure meaning behind these three digits.

I'm also almost positive there just can't be a decimal sign, since all of the items in Jamaa cost gems except for the items sold at the Diamond Shop. It's not as complicated as dollars and coins and what not, I think.

What are your thoughts on this?

That's it for today, goodbye!