Today we're going to be spotlighting one of the most infamous and ruthless hackers in the history of Jamaa: Solidblue02.

Now, you may ask yourself, why give a spotlight to a hacker? Well, I find it just as important to learn about big hackers and scammers of the past as it is previous famous Jammers or other people who committed good deeds.

With that being said, let's hop right into the post!

Back in 2012-2013, Solidblue02 was well-known for hacking and scamming many innocent Jammers.

And that's about it, really. He was like the fman122 of the old, old times. Almost everyone was afraid of him - and those who weren't afraid of him were his colleagues. 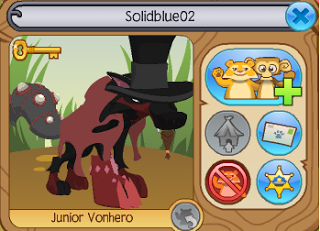 In early January of 2013, he went a huge hacking/scamming craze and lots of people lost their precious items. He often lurked in popular places like famous Jammers' dens and trading servers like Aldan, and when he saw someone with a filthy huge load of rares, he would hack them and/or scam them.

Because he kept getting banned often by AJHQ, he created several different accounts to use to increase the efficiency of his hacking/scamming tactics. One of those accounts was dens.

Solidblue went kind of silent for a couple of years, but then he returned as D3N5. We haven't heard much else from him since.

Who knows? He could still be lurking around Jamaa, watching from the shadows, waiting to pounce on his next victim. o.o Spooky.

(P.S I haven't used this signature in YEARS! I'm so glad I found it deep and buried between some outdated posts. :3)
Posted by gingy gingy at 12:00 AM
Email ThisBlogThis!Share to TwitterShare to FacebookShare to Pinterest