Today I received a lot of wonderful contest entries. ^.^ If you'd like to enter the Friendship Fashion Show, click on the red text for more information.

In other news, my friend penguin55544 of the Animal Jam Spring has quite a story to tell us. He says someone has been generating copies of Animal Jam items.

It all begins in Aldan's Crystal Sands, where he was doing what every average Jammer does, or in this case, trade.

He then came across a shadowy figure by the name of Buttersc0tch. 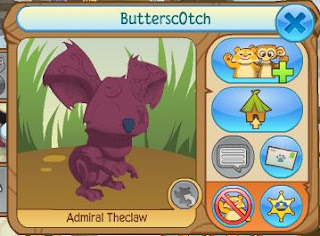 He does look a bit frightening, don't you think?

Everyone quickly gathered around this magenta koala, shouting out which items they wanted, such as glitched rings, black long spiked collars, and headdresses.

Butter immediately worked his magic, and shockingly enough, the items everyone asked for appeared on his trade list.

Either Buttersc0tch is sickeningly rare, or he is using a program to create copies of items! o.o

There isn't much evidence to prove this, other than Penguin's testimony, but here is a picture of the scene that we managed to capture:

As you can see, Butter is wading in the water, along with many other animals yelling "give him space".

But, if you look a little bit closer, you can see that someone says the word "generate".

Here is my guess to what the rest of his sentence says:

"cries u generate any type of nature archway"

This is also more proof that Butter is indeed generating items.

Whatever you do, stay alert and most importantly, BE SAFE! It's nearly impossible to completely trust anyone you meet online.