Hi Jammers! ^.^ It's time for the long-awaited ''reacting to old posts'' post I was talking about earlier.

Alright, now that we've got that covered... let's get started!

I hope you had a good 4th of July! Go America!

It's Summer, and everyone loves to camp out in this season, right? Webkinz thinks so! Just like the Flower Collecting, now you can collect Marshmallows! Collect 30 marshmallows for a special prize. Along the way, you'll receive other camping items. Good luck and Happy Roasting! :)

Hmm. I'm not sure why I capitalized ''summer'', as it's not a proper noun or anything.

Overall I think this post was pretty average for a ten year old. The part that makes me laugh the most is when I said ''happy roasting'' at the end... ahahahahaha. ;P

Hi Jammers! I'm sorry I couldn't post today. I had a rough sleep, so I couldn't wake up early. Then, later in the afternoon, I had 2 shots. In the evening, the cat next door scratched me and now I have huge hives on my skin. :T

Also, there was this one little kid at the park and she threw sand in my eyes and mouth. >:L

So, I've had a very rough day.

Also, I'm glad that I've gotten a few orders for the Animal Jam Portraits. I only have RainbowCat1's portrait finished. I will post it tomorrow. As of right now, no other orders will be finished with these poor, sore arms. >.< Ouch!

Also, there's a mimicry comment on the Portraits tab. It says, "whats your username thought? -nafaria9 to lazy to log in" Listen, peeps, I know that EKJAMA2000 or whoever put their username. I don't type like that, so that's NOT me.

Hey, I remember this day! I got two of my seventh grade shots and Bruce, the cat I ''petsit'' next door, scratched me after I tried to pick her up. XD I'm allergic to cats, so if they scratch me I get big hives everywhere. It's not fun. >.<

I also remember the kid at the park. It was this little girl that was about my sister's age at the time. She was all prissy and childish, as expected. She liked to chuck handfuls of sand at our faces every time my sister and I would walk over to the playground. And I can't forget how I grabbed her arm and looked her in the eye and said, ''STOP.'' She ran away crying to her parents and I'm pretty sure they're wishing that I go to hell still to this day.

Moving on to the Animal Jam portraits section of the post. In 2013 I used to traditionally draw peoples' animals for them as a free commission, but once things began to pick up speed and get hectic, I quit doing them. :p

*exhales* That was a lot of typing. Whew.

Ever since the Daily Explorer got a new author, the posts have been kind of jittery lately.

Take a look at this one: 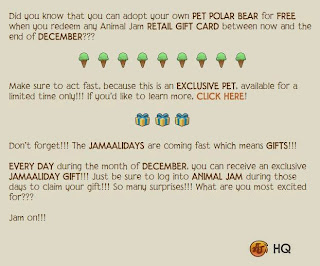 Notice the punctuation? It's RIDICULOUS! Either that, or AJHQ sounds way too over-excited, like their heads are gonna blow up. And sometimes I don't think AJHQ is that happy as they seem...

Anyway, they never use periods or ANYTHING besides exclamation marks and question marks. I've also noticed that they use at least three of each punctuation mark they use. >.<

Seriously. I thought SBI employees went to school! At least they could TRY to make their posts less crappy, and start working on making them look NICE! 8U

Their grammar is getting worse than the News Crew entries they pick. No offense, but from what I've seen, they choose articles written by 5-year-olds.

Enough of my rant... blech.

Honestly, I have to agree with what I said here two years ago. Sometimes the authors over at the DE still use unnecessary emojis, exclamation marks, and question marks. The News Crew articles, however, have slightly improved, which is nice.

This post was made in August 2013. Like I said earlier, 2013 was a good year for the AJW. Can you believe that some of the viewers from way back then are still here today? That's awesome! :D

Just a group of minutes ago, my trusted and well-known friend by the name of Valdespar was scammed on her 3 Scary Bat Wings by crock52. Please, let's all feel sorry and apologetic for her, because she really loved those items. Besides, she was started a collection! Thank zzmama1238 for her generous self. She traded Valdespar a pair, but since Valdespar's still sad.....

IF YOU COME ACROSS THIS GIRL, REPORT HER, AND STAY AWAY FROM HER! SHE MAY ATTEMPT TO SCAM YOU!

Oh, PLEASE. Why can't scamming just be zipped out of everyone's brains?!

I remember Zzmama and Valdespar. They were great friends of mine back in 2013. I don't really know where they are now, but I'm pretty sure they quit. :(

So there you have it! I hope you guys enjoyed.  It was really fun to react to some of my old posts of the past.

Thanks again for reading, and have a great day!
Posted by gingy gingy at 12:00 AM
Email ThisBlogThis!Share to TwitterShare to FacebookShare to Pinterest