How to Annoy People in Animal Jam

Want to take your anger out on something other than your parents? Continue reading.

If you're just overall bored out of your mind, then this post is DEFINITELY for you!

Here is a list I've compiled of many different ways to annoy people on Animal Jam. Enjoy! 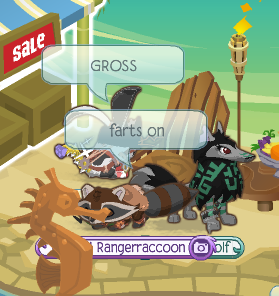 Fun fact: the person who said ''GROSS'' went on to tell me they read my blog, so... kudos to you if you're reading this right now, Artistic Spikypaw.

2. Go to a store. When someone is about to trade for the item they want, quickly trade the owner of the store instead for that same item. If they accept, then consider yourself annoying. A job well done!

3. Stand on someone's player tag or avatar while they're trying to advertise something. This doesn't work as well as it did in the past, but it can be pretty funny at times.

4. Go to one of those medieval Host-Your-Own-Party things and sit down on one of the two thrones saying you're either queen or king, regardless if anyone else is already sitting down. You'll likely cause a ruckus depending on how many people are there. For some reason, EVERYONE wants to be on those thrones, and it's hilarious to watch each other fight over them.

5. Say you're quitting Animal Jam. Be sure to make it very dramatic.

6. In the Forgotten Desert, as soon as another player is about to pick up a gem, quickly pick it up before they do. Sometimes they won't care, but in most cases I've been in, they get mad.

9.  Spam someone's Jammer Wall or JAG mailbox as much as you possibly can. Once you've reached the limit, you could even spam the same person with storage accounts, if you'd like.

13. Join a multiplayer adventure and leave the moment it starts.

Did you notice I stopped at 13?

Did you also notice I copied and pasted an image result for the keyword ''conspiracy'' from Google Images?

ok bye
Posted by gingy gingy at 12:00 AM
Email ThisBlogThis!Share to TwitterShare to FacebookShare to Pinterest