*DISCLAIMER: THIS STORY INCLUDES SOME MATERIAL THAT MAY NOT BE SUITABLE FOR YOUNGER READERS.*

Once upon a time, there lived a fifteen-year-old boy named Grassy Smartyraccoon. At school, Grassy was socially unaccepted, yet he was one of Jamaa's smartest animals in the field of science and math. He was not as academically inclined in the grammar/rhetoric part of the school curriculum, oddly enough.

Grassy struggled with anxiety for the majority of his life. His parents drowned in the waters of Crystal Sands on a vacation when he was very young. Ever since then, he lived alone in his parents' mansion deep within the Sarepia Forest, with no family or friends to help him. The stress of keeping up with school academically and attempting to sell his wacky inventions to sustain himself took quite the toll on his mental health, but he kept pushing forward nonetheless.

One day while daydreaming in a college-level physics class, Grassy had an idea. With all of the anxiety he was dealing with at the time, it was difficult for Grassy to get a proper amount of sleep each night. He drank plenty of caffeinated beverages to keep him going throughout each day, but he knew the drinks weren't helping all that much. Grassy's idea was to create his own energy drink with a grand total of 500 mg of caffeine. He would name it ''Void Juice''.

For the next several months, Grassy would use his knowledge he gained from previous chemistry classes to formulate a recipe for Void Juice. Along with caffeine, it would include medicines, like NyQuil and Adderall, for better health results. The slogan of his product would be "Sweet Release", because it would aid him in dealing with his anxiety and emotional pain.

His recipe was nearly complete. According to his calculations, all he needed to do to perfect the formula was to add 250 mL of ''chlorine acid'', as well as a gallon of liquefied chlorine gas. Unfortunately, Grassy didn't do enough research on chlorine gas, because chlorine gas is what they used in World War I as chemical warfare. As Grassy poured the chlorine gas into the mixture, he immediately suffered a heart attack due to the exposure of the toxins in the gas and died on the spot.

Grassy was so isolated from Jamaa that he took about six weeks for anyone to realize he was missing. However, it was not another animal who discovered Grassy's dead boy. It was the spirits of phantoms from long, long ago who took his body out of the mansion to a secret area even deeper in the Sarepia Forest where they performed an ancient ritual involving roasting the body over a fire pit in attempt to bring Grassy back to life. This was no act of kindness, considering the phantoms were behind it all. Instead of bringing Grassy back to his normal, teenage self, they turned him into a demon creature, and cursed the demon to haunt the mansion for all time and eternity.

Eventually, the mansion was cleaned out by the authorities.

A year later, the mansion went up for sale and was purchased by a bunny family known as the Chillyspirits. The father, Mister Chillyspirit, had just been recruited by the Alphas to help fight off the Phantoms, so mother, Miss Chillyspirit, was left to tend to her two kids: Dancing and Spring.

One autumn evening, Miss Chillyspirit was running errands in Jamaa Township. Dancing was put in charge of her younger sister Spring until Miss returned. Once Dancing put Spring down for her nap, she decided to take a look around her new home and explore a bit.

After exploring, Dancing wanted to read a book. As she was grabbing a book from the bookshelf, she felt a cold wind brush against her face. Curious to see where the breeze had come from, with all her might she moved the bookshelf to uncover a stairway. Dancing wedged herself between the bookshelf and walked down the creaky stairs.

The stairs led to a secret room beneath the mansion. Apparently the authorities didn't do a very good job at cleaning out the house, because in the room was Grassy's chemistry equipment - and the Void Juice. 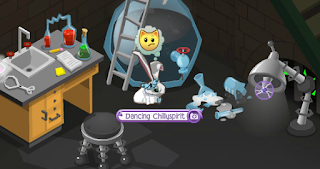 Unsure of what the strange, black, bubbling liquid was, Dancing climbed up the ladder to where the opening of the bottle was. Just as she reached to open the cork, Dancing heard a loud, crashing sound coming from Spring's room and immediately climbed down the ladder and dashed up the stairs to investigate.

It was not a pretty sight. 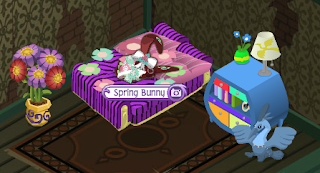 Spring's normally porcelain white fur was drenched in thick, red blood. Dancing frantically tried to find a heartbeat, but there was none. Spring was dead.

Dancing didn't know what to do. She was experiencing millions of emotions at once: panic, sadness, anger, confusion, and grief. Dancing collapsed onto the ground and cried. She was scared, but she was not alone.

Out of the corner of her wet, tear-filled eye, Dancing spotted a dark shadow on the wall in the shape of a sloth. Although nothing was there to be seen, the shadow gradually crept closer and closer to Dancing. She felt another cold wind blow against her face, similar to the one that occurred when she grabbed the book from the bookshelf.

Dancing knew she had to get out of the house as quickly as possible, but the death of her sister had made her muscles weak.

Just as she began to crawl towards the exit, her path was blocked. She bumped into a sweaty, smelly, terrifying creature.

Dancing was too late.

The Sploth had emerged from the shadows and was standing right in front of her. 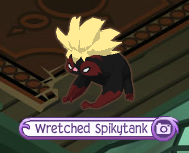 The Sploth's breath reeked of coyote meat, deer flesh, and Fritos. His hair was greasy and stinky, as if a mother rat died while giving birth to her babies in it.

"Who are you!?" Dancing wailed.

"I am the Sploth," the creature boomed. "I own this house."

"Why did you kill my sister!?"

"Reasons. It's nothing personal, really."

"I might ask you the same thing. Why are you in my mansion?"

"You're crazy! My parents bought this place! It's ours now!"

Dancing tried to kick the Sploth in the shin, but ultimately failed. The Sploth picked Dancing up and pinned her throat against the wall.

"How about I make you a deal?" the Sploth said. "If you want your puny little sister back, you have to do exactly what I tell you."

"You must go downstairs to my laboratory and give my Void Juice a taste-test."

"The black stuff, dummy!" the Sploth yelled angrily and put even more pressure on Dancing's throat. "I saw you down there not too long ago. You know what I'm talking about!"

The Sploth let go of Dancing. The bunny fell to the floor and gasped for breath.

"Get to it," the Sploth demanded.

Shaking, Dancing walked down the stairs to the laboratory. She climbed up the ladder and unscrewed the cork. The chlorine gas was released into the air.

Dancing suffered the same fate as Grassy and died on the spot. 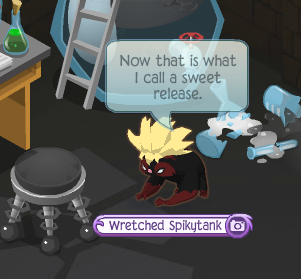 The Sploth continues to haunt that same mansion to this day, interrogating anyone who comes near his ''humble'' abode and tricking them into drinking his signature Void Juice. Whenever he's not tricking innocent Jammers, the Sploth is killing coyotes and eating them.

The moral of this story? Don't drink anything that looks suspicious - especially if it has ''chlorine acid'' and liquefied chlorine gas.