Could Hedgehogs Be Animal Jam's Next Pet?

Hello everyone! I hope you've all had a lovely weekend so far.

Today, we are going to be discussing pets. There are tons of pets in Animal Jam - and I mean tons. Over the past several years, we've seen new pets get thrown out in updates like bullets, and it's not just with updates. The addition of the Eggstravangza (where you purchase an egg and let it hatch into a pet) event, as well as pets being awarded as promo gifts, also cause the number of pets to increase.

We've got a lot of different pets to choose from and adopt, to say the least.

The most recent pet to be added to the game is the poodle, in celebration of the Year of the Dog for Chinese New Year. Since we got a new pet just a few days ago, I don't think we'll be getting a new one anytime soon, but that doesn't stop me from speculating.

So... if Animal Jam added a new pet, what would it be?

Well, I might have the answer to that question!

The new homepage for Animal Jam features a bunch of different animals and pets in a Friendship Festival themed setting. One of the pets has yet to actually exist in the game itself. 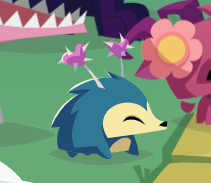 It's a hedgehog! Or a porcupine...

Could hedgehogs be Animal Jam's next pet? I mean, there's already a minigame called ''Hedgehog'', so the move would be logical. What do you guys think?