Hey Jammers! As you probably already know, today is another update day.

In this update, not much is new. Sure, polar bears have returned, the seasonal Special Delivery adventure is back, and it is now proven by AJHQ that goats are indeed the next animal to arrive in Jamaa.

But there IS a new Jam-A-Gram system! 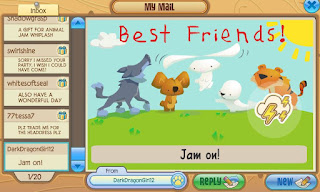 In some ways, this system is actually quite useful. You can easily see Jam-A-Grams that are hidden way back in your mailbox, and more effectively choose designs for your Jam-A-Grams.

But, then again, in my opinion, the layout is a bit bunched together. I feel like all of the buttons are crammed into one small area, whereas on the other Jam-A-Gram system, the buttons were spread out. Not to mention it's also rather laggy.

Anyway, you can also vote for which animal you would like to see next AFTER the goats. The three choices are ostriches, sloths, and falcons. I personally chose ostriches, but sloths would be cool, too. Falcons look like a mix between the owls and eagles. 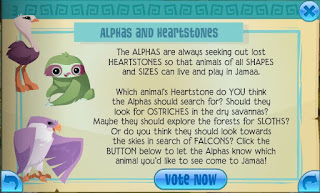 And finally, here are a few funny things I overheard while traveling and exploring Jamaa:

I wonder what a fried strawberry would taste like. o.O

Posted by gingy gingy at 3:36 PM
Email ThisBlogThis!Share to TwitterShare to FacebookShare to Pinterest