Most people called it the ''mace tail'', but I often referred to it as a ''mummy tail''. And yes, that is a screenshot of Aparri on his old account with the tail.

Just like every other unreleased item, only a few people owned the mummy tail, making it extremely rare, and it is unknown how this item came to be. One day the mummy tail just suddenly disappeared. It was probably taken out of the game.

Ever since then the mummy tail was unheard of, until today.

Today, in the diamond shop, AJHQ released a slightly edited version of the original mummy tail. 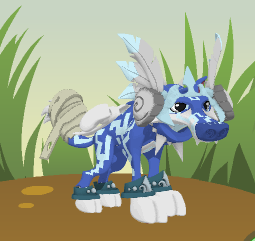 It looks like someone wrapped thick toilet paper all over my tail, but... y'know. Or maybe it's white gauze. I don't know. What do you think it is?

Kudos to my pal/fam Anar for telling me about this ugly item. ;p