Top Rares of the Past

Hi Jammers! I know I've done a couple of posts like this before, but today I decided to talk about a few items that were actually unbelievably rare in the past. Now, I'm not an expert, so if I get some information wrong, feel free to correct me with constructive criticism. Any feedback is greatly appreciated. :) Oh, and one more thing - I won't be naming ALL of the top rares of the early days of AJ. Just a few. ^.^

The first one is the orange beard.

These were extremely valuable back then. Only a few people had it, and for some of the owners, this item brings back many flashbacks, good or bad. When the Forgotten Desert adventure was released, so was the orange beard, and it lost most of its rarity. 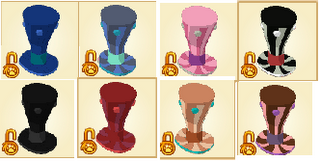 Ahh, yes, top hats. One of the most popular rare items in 2011. You can find lots of stories from people who owned top hats back in those days. Friendships were not only gained but lost over these items... :( Okay, enough sad talk. :P

When the limited time Hatapalooza stores came out in 2012, top hats lost much of their rarity. Some Jammers were thrilled to finally own their dream item, but others were quite disappointed of the top hats' re-release.

The final item I wanted to discuss today is the glove. Gloves were first released in Jam Mart Clothing for a cheap price of 45 gems in 2010. When gloves went out of stores, they became very, very rare. People went CRAZY for gloves back then just as much as people nowadays go crazy for spikes!

Then, in 2011, the glove made two reappearances: one in Jam Mart Clothing, and another in the Shiveer Shoppe. Like the top hats and orange beards, when gloves were re-released into the game, there was a mixture of reactions from the public.

Gloves have also been released a couple of times as a RIM, too.

While gloves are currently not available in any store in Jamaa, you can get them from adventure chests, the Forgotten Desert, trading and gifting (obviously), and the Trading Party claw.

Gloves have always been my favorite clothing item, so that's why I sort of elaborated more on them. Hehe!

Well, that's it for today's post. What did you guys think? Do you want to see more of these kinds of informational item posts? What are your opinions on past rares vs. current rares?