Hey guys! Several days ago a Jammer named theshopking made a video on a new scam that's been going around Jamaa, and honestly, after doing a bit of research, this might not even be a real scam. Perhaps it's more of a simple misunderstanding.

So, apparently, a lot of people have been claiming that the heart jewelry box, which was released a year ago for the Friendship Festival in Jam Mart Furniture, is a really rare promo item that's worth a few black longs. 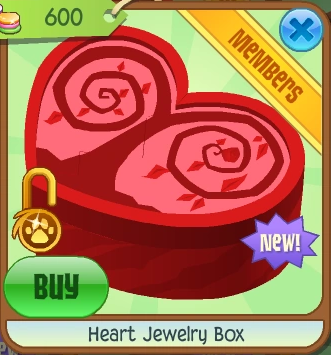 Some people have even been saying that they're worth HEADDRESSES.

Now, I'm not sure if this item is actually that rare, but since it's a seasonal item, there's a good chance that it will return to stores very soon.

Whatever the facts, one thing is for sure: this item does NOT come from a code, meaning it is NOT a promo item!

Well, that's all for today. Have any of you guys seen this ''scam'' in your travels on AJ? Leave your experiences with scams in the comments!