Today we're going to be talking about achievements.

Even if you're still fairly new to Animal Jam, I'm sure you all know what achievements are. Achievements are like merits you can earn by exploring Jamaa. However, some achievements are no longer obtainable, but some accounts that played in the early days of Animal Jam have them because back then they were, well... achievable.

One of these achievements is called ''One Of A Kind!" This achievement was given to you if you bought a pet with a rare feature, like an accessory. This achievement was only possible to get for about a half a year after pets were introduced into the game. Now that we have the Pet Stop where you can choose how to customize your pet in whatever way you want, this achievement is no longer necessary.

(pictures from the Animal Jam Flash)

I actually own this achievement myself. I bought a pet seahorse once, and with my luck it came with a rare feature: a fancy knight helmet. c:

The next achievement is called "Answer The Call!" This achievement was given to you if you answered a total of 15 polls around Jamaa. These polls were called calls of the wild. These surveys aren't around anymore, so naturally this achievement is in fact no longer obtainable.

Last of all, the final achievement is called ''Herbology Expert!'' It's believed that you could get this achievement by clicking on plant facts around Jamaa in its beta testing period. A unique thing about this achievement is that it was removed from the game completely, so not a single account out there has it. 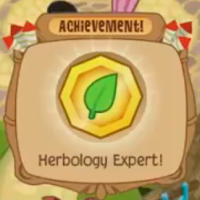 I hope you enjoyed learning about these ''extinct'' Animal Jam achievements. :) Have a great day!